MIT detective helps rape victims think of themselves as survivors 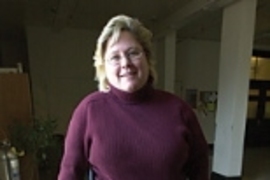 The essential tools of her trade: gun, radio, Kleenex.

Det. Sgt. Mary Beth Riley heads the sensitive crimes unit of the MIT Police. She sees a lot of tears in her job, and feels the pain and fear of people reporting sexual assault. She guides them through the reporting process and, in most cases, watches them evolve from victim to survivor, an important distinction for victims of sexual assault who need to feel empowered again.

"I like to refer to them as survivors, not victims. I try to give control back to the person, and if you continually refer to them as victim, it almost becomes a self-perpetuating thing," explains Riley, a 30-something woman who wears the uniform of a detective--a sweater and slacks, usually with a blazer.

Rape is a crime of power and control, not sex. And it nearly always strips its victims of their sense of physical security and emotional well-being. Because it's also an intimate crime, usually perpetrated by someone familiar to the victim, it frequently instills a deep sense of guilt and responsibility that often overpowers the rational mind's awareness that rape is a crime.

"Statistics show that rape is the most underreported crime, and that it's the least likely to be falsely reported," Riley said. And because the victim is usually familiar with the perpetrator, it creates yet another obstacle: the fear of being ostracized and the ramifications of reporting rape by someone you know.

"Forget what you see on TV, where a stranger grabs someone off the street and drags them into the bushes. That is not the scenario we typically see. More typically it's someone you know and maybe trust--and that makes it harder to report," said Riley, who worries about the students who don't report the crime to the police.

"We want them to report so that we're aware it happened. We even have an anonymous sexual assault form people can use," she said. "If they decide to report, the decision about prosecuting does not have to be made initially. I would like them to talk to a D.A., because they're the people who can help them make the decision about going forward.

"But I stress medical attention. Antibiotics for STDs [sexually transmitted diseases] should be administered within 72 hours. If they were drugged with a date-rape drug, that can be out of their system in eight to 12 hours. So it's important to get medical attention immediately. Once the physical evidence is gone, it can't be recreated."

When a rape is reported to the MIT Police, Riley is called. She said there are other officers on the campus force who are trained to deal with sexual assault, but it's usually Riley who gets involved. The first thing she does is calm the person. That's where Kleenex comes in.

"We're dealing with people who have recently survived what is probably the most traumatic event of their lives," she said.

If the person is willing to get medical attention, Riley calls Beth Israel Deaconess Medical Center and asks them to have a sexual assault nurse examiner (or SANE--a specially trained nurse who volunteers to care for sexual assault victims) meet the victim at the hospital. Riley drives the victim to the hospital in an unmarked car.

Patricia Duggan, who coordinates the 25 SANE nurses in the Boston area, explained that the hospitals involved in the program (Cambridge, Boston Medical Center, Beth Israel, Brigham and Women's, Mass. General and Newton-Wellesley) will take a sexual assault victim to a private room immediately. The nurse will arrive within 40 minutes, often accompanied by a rape crisis advocate.

The examination takes time, usually between three and five hours depending on the injuries sustained.

"We take it slow. We talk to them, spend time getting the history, listening to them. And we always believe them," explained Duggan.

"We're often the first people they've reported to and we treat them well. We kind of beef them up and make them feel better. For instance, in the case of a brutal rape, we can examine the woman and assure her that there is no vaginal damage. That allows the emotional healing to begin sooner. I think in the long run, patients do a lot better if they get this care," said Duggan, who added that the exam is confidential. Evidence is gathered, but nothing is done with it unless or until the victim decides he or she wants to move forward.

Duggan added that sexual assault victims can go on their own to the hospitals mentioned above, and a SANE nurse will be called.

Riley agrees that the victim's recovery is the most important thing. "We're dealing with terrible situations and hoping to get them on the road to recovery." She said one of the most satisfying moments of her eight years on the force was when she received a thank-you note two years after the person had reported a rape.

"You don't expect something like that because it's not why you do the job. You do it because it's the right thing to do," said Riley.

A version of this article appeared in MIT Tech Talk on March 5, 2003.