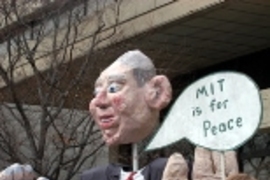 Members of the MIT community turned out in force on Thursday to support a student-led walkout and rally to protest the war on Iraq.

A crowd estimated at 600 filed out of offices, classrooms and labs at noontime, gathering on Kresge Oval to applaud speakers who voiced opposition to the U.S.-led attacks that began Wednesday night.

The MIT Anti-War Coalition, a student group, organized the rally, recruited speakers, provided materials for making signs and banners, and transported the large, popular George W. Bush puppet to the steps of the Stratton Student Center. The puppet requires three handlers; once aloft, it danced a goofy samba.

Students wearing white jump suits -- dubbed "cog suits" to dramatize their slogan "We will not be cogs in the war machine!" -- quietly passed out bandage-style armbands, complete with fake-blood "wounds." Anti-war chants and Brazilian drums provided rhythm and a little dancing for the chilled protesters.

"Nobody likes a bully," "MIT Nerds for Peace," "Get a non-military job!" and "I love my country -- I oppose this war" were among the slogans. An enormous banner -- "MIT says No Blood for Oil" -- was spread out on the ground near the MIT Chapel, easily visible to local TV news helicopters, swirling overhead.

Ayida Mthembu, associate dean, Counseling and Support Services, told the cheering crowd of mostly students, but including faculty, staff and administrators: "With this war, we are witnessing the effects of a coup d'etat. But by coming out here, we can be renewed. Bush and his White House Negroes want us to be confused and passive and afraid. They want us to watch TV and doubt our common sense. But common sense says, war is horrible. Being here says, we love the world enough to struggle together to make America the place we want it to be."

Hugh Gusterson, associate professor of anthropology, Science, Technology and Society, warned the crowd that the war in Iraq is "about oil, about Israel, about American global dominance. We must decide what kind of country we want to live in -- one guided by Bush, Cheney and Rumsfeld's squalid, inhumane vision? Do you want John Ashcroft reading your e-mail?"

"As an American, I have a right to demand the Iraqis be treated as human beings. I demand the U.S. and the U.N. be held accountable for the suffering of Iraqi citizens. God bless America AND the world," said Zamen.

Balakrishnan Rajagopal, assistant professor in urban studies and planning and director, Program in Human Rights and Justice, declared, "I'm a lawyer, and I am here to tell you, the U.S. has just trashed international law and our own laws."

He predicted the Bush administration would rely increasingly on the "rhetoric of liberation to justify military action."

Stephanie Wang, junior in economics who works with United Trauma Relief, an international humanitarian aid group, said, "Technology dominates our minds and discourse here. Now we have to stand for humanity. Liberation does not come from killing innocent people."

Afiya Whisby, a junior in architecture representing the MIT Black Students Union, declared with a sob, "I am angry because people who look like me will be dying disproportionately in the war. They're in the military because they could not afford to go to school."

Christine M. Ortiz, a sophomore in chemical engineering, urged protesters, "Speak in one unified voice: we will not stand for this!"

Jeff Duritz, a graduate student in urban studies and planning, encouraged the crowd to "remember there are people in our community who are in ROTC and people who work for the department of defense. MIT is part of the military-industrial complex. But let us be respectful of one another."

The MIT protesters were joined in mid-afternoon by student groups from Harvard and Tufts. The united throng set off toward a larger rally in Boston, pausing to sit in on the Harvard Bridge, shutting down traffic briefly.