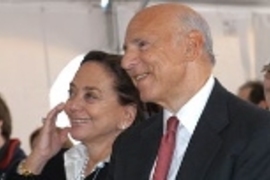 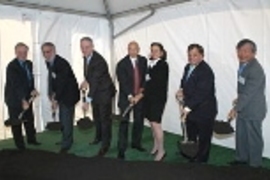 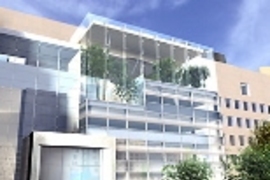 Caption:
Barbara and Jeffry Picower smile at Friday's groundbreaking for the Picower Center for Learning and Memory at MIT.
Credits:
Photo / Donna Coveney

Tonegawa, the Picower Professor of Biology and Neuroscience, said the center's soon-to-be-built space will allow gifted researchers to focus on how the human brain learns and remembers.

The Picower Center is one of three entities in the Institute's new brain and cognitive sciences project. The facility, located on Vassar Street near Main Street on the northeast corner of the MIT campus, is made possible with the help of a $50 million gift from the Picower Foundation of Palm Beach, Fla., a private foundation created by Barbara and Jeffry M. Picower. The center is scheduled to open in 2005.

The mission of the Picower Center for Learning and Memory is to understand the mechanisms that allow the brain to learn, remember and think. Established in 1994 in several locations around the campus, the center explores learning, memory and cognition as well as development in the growing brain by using a multidisciplinary approach that addresses every level of brain function from molecules to synapses, neural circuits and behavior.

"Today more than ever, we are ready to apply the tools of the natural sciences to get to the bottom of the mind," Tonegawa said.

"The Picower Center will help give us the scientific understanding to satisfy our curiosity and also improve learning, communication and create therapies for the emotional and mental disorders that devastate so many lives," said MIT President Charles M. Vest during the ceremonies.

The new facility--the Picower Center's first permanent home--will include laboratories, teaching facilities, a conference center, research and administrative offices, clinical space and student lounges. It will offer better and larger communal facilities such as those for microscopy and magnetic resonance imaging, which will permit scientists to pursue new types of projects.

Robert J. Silbey, dean of the School of Science, said that like the Koch Biology Building, which also brought formerly disparate entities together under one roof, the brain and cognitive sciences project will foster interdisciplinary research. The facility's attractive and innovative use of space "will make this end of campus a focal point" for collaboration and social interaction, he said.

The project brings together facilities for the Picower Center for Learning and Memory, the McGovern Institute for Brain Research and the Department of Brain and Cognitive Sciences. Each of the three entities will occupy its own building, with all three grouped around a five-story atrium topped with a skylight.

The architectural design for the 376,000-square-foot project is a collaborative effort of Boston-based Goody, Clancy & Associates and Charles Correa Associates of Bombay, India.

In addition to the Picowers, Vest, Tonegawa and Silbey, Cambridge Mayor Michael Sullivan spoke at the groundbreaking. Also in attendance were Cambridge city manager Robert Healey and former mayor Anthony Galluccio, members of the MIT Corporation, and brain and cognitive sciences researchers.