Scientists forge ahead with domestication of molecules 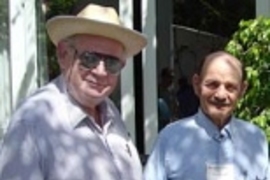 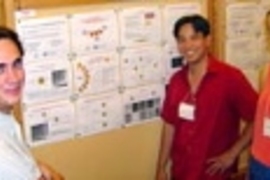 Thousands of years after humans domesticated farm animals, they're moving on to a different sort of workhorse: molecules.

"About 10,000 years ago, man began to domesticate plants and animals. Now it's time to domesticate molecules," said Professor of Biology Susan Lindquist, director of the Whitehead Institute for Biomedical Research, at a recent conference on the subject of self-assembling peptides and proteins.

Lindquist studies yeast proteins to learn what makes them fold into the shapes they take and how to get them to fold differently to create new structures. Scientists have found that misfolded proteins called prions can influence the fate of cells, causing the daughter cells to create the same prions, which are believed to be a major culprit in amyloid diseases such as Alzheimer's, mad cow disease and scrapie, and may be a factor in smallpox.

"The fact that proteins can misfold and form amyloid diseases is an ancient problem. It means Mother Nature has taken advantage of it," said Lindquist. "We think that we can start taking advantage of protein misfolding ourselves to form protein systems in nanostructures," she continued in her presentation at this summer's workshop on "Self-Assembly of Peptides and Proteins in Biology, Medicine and Engineering" in Crete.

Peptides are strings of two or more amino acids held together by a particular chemical bond. Proteins are large strands of peptides linked together in an order specified by a cell's DNA. The order of linkage induces the protein to fold into specific, three-dimensional shapes that determine properties of the protein. The protein's configuration can be altered (denatured) when exposed to changes in its environment, such as heat or acidity.

In addition to the studying the causes of disease, scientists and engineers are learning to manipulate peptides and proteins, inducing these building blocks to self-assemble into biomaterials with particular properties (strong, brittle, elastic, smooth, etc.). Similar to the way a single silk thread gains strength when twisted with other threads, strings of peptides can be induced to fold, curl and twist, or bond together to form ropes or even tiny scaffolds on which other types of tissue can grow in vitro.

Unlike traditional work with molecules, which was solely the domain of biologists, bioengineering of this type requires a diverse set of scientists and engineers: biologists, materials scientists, mechanical engineers, physicists, computational engineers and mathematicians, among others.

This new field has only recently become possible because of advances in technology of the past decade. Computing power, spectroscopy and DNA sequencers allow scientists to see what's happening at the nanolevel and experiment in that ultra-small world using fast and powerful equipment.

Angela Belcher, a materials chemist and the John Chipman Career Development Associate Professor of Materials Science at MIT, is using natural biological processes to create non-natural materials, for instance, by binding organic peptides to inorganic semiconducting materials. She described a project in which she selected a protein for its ability to bind different materials at each end to make it work like a "bridge" to make a new material "wire."

Alexander Rich, the William Thompson Sedgwick Professor of Biophysics at MIT, got into the field while experimenting to find proteins that bind to Z-DNA, the so-called left-handed DNA he discovered in 1979. When he found the left-handed DNA, scientists were bewildered.

"The scientific community said, 'Who needs this? We can learn what we need from the right-handed DNA.' But nature is opportunistic. It will use what is there," said Rich, who persisted in his search for the function of Z-DNA.

And he found it. A protein named E3L made by the smallpox virus binds to the Z-DNA of actively transcripting genes in healthy cells, thereby working its way into the DNA of the cell. He described the use of proteins by the virus an "example of the kind of dirty tricks that are being played in this deadly game at the molecular level. Now I've gone full circle. Nature has in fact found a use for this."

"Suddenly this very quiet field of molecular biology--what I call a 'molecular biology backwater'--is a field of some interest," Rich told the workshop audience, referring to the government's interest in his work on the smallpox virus.

Other research covered by speakers included the work of a materials scientist seeking to discover the molecular basis of Huntington's disease by experimenting with strings of peptides, and a biochemist's description of the treatment of dental caries using long strings of polymers made to order by inducing peptides to assemble in novel ways, each with a particular shape and property.

Conference speakers included Carleton Gajdusek, who received the Nobel Prize for physiology or medicine in 1976 for tracking down the culprit behind some degenerative brain diseases; mathematician Benoit Mandelbrot, who first discovered fractals; Carl Branden, a pioneer in structural biology; George Klein, an expert in cancer biology; and Martin Karplus, a pioneer in molecular modeling and simulation.

Other MIT presenters were Professor Roger Kamm of the Biological Engineering Division; Bruce Tidor, associate professor of bioengineering and computer science; Wonmuk Hwang, a postdoctoral associate in the Center for Biomedical Engineering (CBE); and Shuguang Zhang, associate director of the CBE and the MIT organizer of the workshop. Several students presented posters.