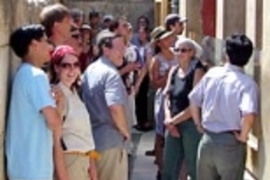 ↓ Download Image
Caption: Scientists and students from around the world gathered in Crete, Greece, this summer for a workshop on self-assembling peptides and proteins. Many of the group took an afternoon trip to Knossos, the architectural ruins of a Minoan palace inhabited in 1450 B.C.
Credits: Photo / Beau Peelle 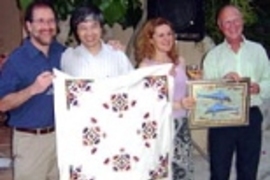 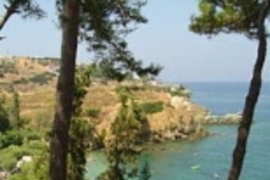 ↓ Download Image
Caption: A hotel and convention center overlooking the Aegean Sea provided the perfect balance of beauty and isolation for scientists at the summer workshop.
Credits: Photo / Beau Peelle

Caption:
Scientists and students from around the world gathered in Crete, Greece, this summer for a workshop on self-assembling peptides and proteins. Many of the group took an afternoon trip to Knossos, the architectural ruins of a Minoan palace inhabited in 1450 B.C.
Credits:
Photo / Beau Peelle

Caption:
A hotel and convention center overlooking the Aegean Sea provided the perfect balance of beauty and isolation for scientists at the summer workshop.
Credits:
Photo / Beau Peelle

"Peptides," not "plastics," might have been the one word of career advice imparted to Dustin Hoffman's character in the 1967 film "The Graduate," had it been made today. Just as plastics was weaving its way into the fabrics of our lives 40 years ago--in furnishings, packaging, medical devices and more--peptides are becoming the building blocks of many new materials of the 21st century.

"There is a great future in plastics," a family friend confided to Hoffman in the film. The same may be true for peptides.

These microscopic strings of amino acids (the basic units of proteins) represent to a small group of forward-thinking scientists and engineers what plastic polymers did a half century ago: building blocks with seemingly inexhaustible possibilities for producing new materials capable of solving some of the most pressing problems in medicine, materials science, biology and engineering.

"Essentially we've created a new field. It's like a baby being born; it goes very slowly. Maybe it's a toddler now and people are starting to take stock. Or even a six-year-old who's making funny faces," said Shuguang Zhang, associate director of MIT's Center for Biomedical Engineering, who is working on the production of nanoscaffolds made of biomaterials. While his metaphor of a child might not seem so favorable, Zhang says it appropriately describes the amused sentiment of some scientists toward the new field. "It's true. People still laugh at us."

But Zhang, who already sees these self-assembled materials moving into the world of commercial development, such as in tissue engineering and biomedical devices, recently organized an international workshop on the topic in Crete this summer. "Self-Assembly of Peptides and Proteins in Biology, Medicine and Engineering" was the third workshop of its kind organized jointly by Zhang and colleagues at Princeton University (Michael Hecht of chemistry) and the University of Leeds (Amalia Aggeli and Neville Boden of the Center for Self-Organizing Molecular Systems).

About 120 professionals--molecular and computational biologists, chemists, engineers, materials scientists, mathematicians and physicists--met to share their research in this new and broadly conceived field. The atmosphere was more congenial than competitive as researchers of diverse backgrounds exchanged concepts and techniques, and young researchers spent time with their more experienced colleagues, including a few scientific pioneers, like MIT's Alexander Rich, best-known for his discovery of transfer DNA and Z-DNA.

Mathematician Benoit Mandelbrot of fractal fame was another attendee, as were Carl Branden, a pioneer in structural biology; George Klein, an expert in cancer biology; Martin Karplus, a pioneer in molecular modeling and simulation; and Carlton Gajdusek, who won the Nobel Prize for physiology or medicine in 1976 for tracking down the culprit behind some degenerative brain diseases. (The culprit was--you guessed it--self-assembling proteins.)

"In the area of self-assembling peptides and proteins, nobody knows everything, so they all have a lot to learn from one another," said Zhang. "They get ideas from their colleagues, but don't fear the competition. For instance, a mathematician talking to a biologist cannot take his ideas; they have to work together. And a materials scientist can collaborate with a physicist. The mix is deliberate to create a complementary science, because nature itself is complementary."

Everyone stayed at the same conference center in Aghia Pelagia, Crete, took their meals together and went on side trips as a group. Only one talk was held at any given time, and nearly all attendees remained at the center following their own talks--a rare phenomenon at scientific conferences.

"Location is very important and so is isolation," said Zhang. "If you hold this in the city, people will just give their talks and leave. You want people to be there long enough to get to know each other, to share ideas and discuss emerging science."

The youngest person at the conference was a 19-year-old undergraduate; the oldest was Gajdusek, whose travels, research, prolific diaries and cascading conversation give him special status among the community.

"Scientists are human first. Once they like each other they'll work together," continued Zhang. "The young people get inspired by talking to the experienced and well-known people in the field, who they would never have approached on their own. And the old people get energized. It's like a self-feedback loop."