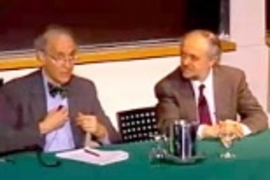 Molina led with the scientific facts of global warming and global climate change, followed quickly by Chivian's report of how climate change has altered our world for the worse, leaving the audience in Room 10-250 a bit stunned by the immediate threat and slowly awakening to the realization that we have to address the problems now.

The Nobelists agreed that "science" won't solve the problems. Individuals must solve them, by changing habits and opening the eyes of policy-makers.

"We have to look at these problems directly without avoidance or denial," said Chivian, a former psychiatrist with MIT Medical who co-founded International Physicians for the Prevention of Nuclear War, which was awarded the Nobel Peace Prize in 1985. He is now director of the Center for Health and the Global Environment at Harvard Medical School.

"What should be done?" asked Molina, an Institute Professor and winner of the Nobel Prize in chemistry in 1995. "The answer to that question does not lie entirely within science."

The Earth's temperature, which has been stable for a thousand years, has risen in the past 100 years by about 0.5 degrees Celsius because of additional infrared radiation being absorbed by the atmosphere. Molina explained that this is an indirect result of the increased use of fossil fuels, which generate carbon dioxide, which absorbs infrared radiation that normally would pass through the thin atmosphere and travel on into space.

He described the similarity between mathematical patterns of the explosive population growth of the past century, the steady increase in the amount of carbon dioxide in the atmosphere, and the increase in the mean surface temperature of the Earth. All occurred during the same 100-year period, indicating that human beings are the likely culprits behind these detrimental changes.

Even with immediate action, things will continue to change negatively for a time, Molina said. "But if we continue with business as usual, the change will be much greater. We have only one planet. In my own personal opinion, this is certainly enough reason to do something differently."

Chivian quickly dispelled any remaining complacency in a talk that was at once gently humorous and unequivocal in its message: ignore the loss of biodiversity at your peril.

"People have become so disconnected from the natural world that true nature seems to many like an alien creature to be altered, exploited and even killed," he said after telling a story about a brown moth trapped on a commercial airline. Amid passenger panic, Chivian insisted on catching the moth in an airsickness bag and releasing it after landing in Boston. "That was one of the few times in my life when people might have said, 'Who was that masked man? Or more likely, 'Who was that madman?'"

"Of the 150 most frequently prescribed drugs, more than half are derived from or patterned after the natural world," said Chivian, who rattled off a few of the most well-known: quinine used to treat malaria; salicin (from the willow tree), the natural component on which aspirin is patterned; and digitalis, which comes from foxglove and is used to treat congestive heart failure.

He described one of the 500 species of cone snails that injects its prey with a peptide toxin that blocks the transmission of pain without blocking fine touch. This natural painkiller is 1,000 times more potent than morphine without being addictive. But cone snails are now endangered because they've been collected for their pretty shells, and live on endangered coral reefs.

Bears, Chivian said, hibernate for up to seven months without suffering bone loss and without eating, drinking, urinating or defecating. Learning how bears accomplish this could help researchers find ways to prevent human bone density loss and design treatments for kidney disease, among other things. But climate change has warmed the Antarctic region and polar bears are an endangered species.

Lyme disease is more prevalent in the eastern United States than in the western part of the country because the blood of the western fence lizard contains a substance that kills the disease-carrying bacteria in ticks. The greater diversity of invertebrates in the west means fewer cases of Lyme disease, Chivian said.

Chivian said the failure of the United States to sign the global climate accord "should be a matter of national disgrace."

"We need to apply resources on a scale similar to the Manhattan Project to develop alternative energy methods," he said.

"Don't buy tropical hardwoods like teak and mahogany unless you know it's grown in a renewable way. And for God's sake, turn off the lights in rooms that are empty and turn down the heat at night. Wear a sweater," Chivian calmly told the audience.

Eric Chivian teaches a course through Harvard Medical School that is open to MIT students. See http://www.med.harvard.edu/chge/course/index.htm for information. The next lecture in the Ford/MIT Nobel Laureate Lecture series is scheduled for Sept. 23, when Institute Professors Phillip Sharp and Jerome Friedman will look at the impact of national security issues on research.