Mitchell to step down as dean of architecture 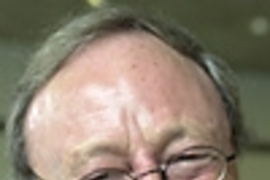 William J. Mitchell, dean of the School of Architecture and Planning, has announced he will step down at the end of this academic year to concentrate on his new leadership role at MIT, head of the Program in Media Arts and Sciences, the Media Laboratory and the International Affiliated Media Laboratories.

Widely credited as a source of inspiration and guidance in plans for MIT's campus construction campaign, Mitchell will continue to serve as architectural advisor to President Charles M. Vest, a position he has held since 1998.

"Bill Mitchell has accomplished a great deal as dean of architecture and planning. His vision for the integration of design and professional education as central themes has moved the school forward in very significant ways," said Provost Robert A. Brown. "He also has played a lead role in integrating the Program in Media Arts and Sciences as a full partner in the school. I look forward to his continued leadership in media arts and sciences."

In 1992, Building 20 stood where construction crews now work to realize Frank Gehry's design for the Ray and Maria Stata Center for Computer, Information and Intelligence Sciences. A little green lawn and barbeque pits filled the space between the Student Center and Johnson now occupied by the Al and Barrie Zesiger Sports and Fitness Center. An empty lot yawned where Simmons Hall now stands.

Mitchell became a kind of tour guide of turned-over terrain, leading groups of visitors, staff, students and faculty from one muddy site to the next. He brought to life an exciting sense of what the new buildings would look like long before they were officially opened in festive ceremonies this year (see MIT Tech Talk, Nov. 7, 2001).

Within the School of Architecture and Planning, Mitchell oversaw community-building by recruiting women and minority faculty and supporting collaborative efforts such as the MIT Program on Human Rights and Justice, a joint venture of the Center for International Studies and the Department of Urban Studies and Planning.

As the practice of architecture has evolved to include innovations in technology and in interdisciplinary studies, Mitchell has overseen changes in course offerings and in web-based and remote collaborative design opportunities.

In a recent interview, he noted another dimension in which architecture has changed: the dimension of dimension itself.

"Architecture used to be the walls around us. But functions can migrate to surprising new settings. Think of the desk: it got sucked into a computer screen and became a virtual desktop. Think of the telephone: it used to hang on the wall. Now it's a fashion accessory. Designers now must jam more and more functionality into smaller and smaller mobile packages," said Mitchell.

He carries only a cell phone and a "nice quality laptop," but he can envision a future in which many more of our needs are served by wearable, wireless boxes--all designed by a new generation of architects working in built and virtual environments.

Colleagues appreciate Mitchell's commitment to developing the field of architecture virtually and globally.

Shiraz Allibhai worked with Mitchell to develop ArchNet, a teaching tool and resource for the study of architecture in developing countries that was launched in September. Allibhai is the managing director of ArchNet.

"Bill's vision and guidance have shaped ArchNet's direction and he has been instrumental. He has always pursued and advocated for the use of technology to solve common problems and build a better world," Allibhai said.

Mitchell has been an enthusiastic teacher throughout his career. "Architecture is not only making physical things; it's a social and cultural enterprise. For me, teaching is where the action is, intellectually; I've always taught and I intend to stay in teaching. Education is how we really influence the profession," he said. "Our students do truly pathbreaking things, and we keep learning."

While serving as dean, Mitchell wrote what he calls his "informal trilogy" on the relationship among real space, virtual space and human communities. The first volume, "City of Bits: Space, Place and the Infobahn" (1995), was an innovation in publishing: it appeared simultaneously in paper and on the World Wide Web, complete with links and interactive functions. "City of Bits" and "e-topia: Urban Life, Jim, But Not As We Know It" (1999) received wide acclaim. "Me++: The Cyborg Self and the Networked City" is to appear in September 2003. All are published by MIT Press.

Roger L. Conover, executive editor at MIT Press, worked with Mitchell on the trilogy and two other books. Noting that Mitchell's books were among the "first to tackle key issues in the theorization of virtual environments," Conover applauded their clarity, humor and accessibility for the general reader.

"Architecture is always present in his work, and so is the body. Regardless of the particular bits of space he is talking about at any given time, his enduring interest is in human beings at the interface between systems and space," Conover added.

Mitchell himself credits the "essay-banging-out relentlessness of my British-based Australian education" for his capacity to write quickly and in a natural voice. His literary interests lean to "serious, boundary-pushing novels and a few poets, including Australian Les Murray," he said.

Mitchell and his family travel to Australia two or three times a year. He was raised in the Wimmera, a rural area halfway between Adelaide and Melbourne. His parents were teachers and his grandparents were engineers and miners.

Sitting in his Building 7 office with its ceiling-height bookcases lining one wall and neat skyscraper-like stacks of books on his desk, Mitchell said he vividly recalled his first view of an urban skyline. It flashed through the window of the train as he traveled with his parents to Melbourne for the 1956 Olympics--and set a career in motion.

"All those buildings! That height! Terrific!" he said.

Before coming to MIT, Mitchell was the G. Ware and Edythe M. Travelstead Professor of Architecture and director of the Master in Design Studies Program at the Harvard Graduate School of Design. He previously served as head of the Architecture/Urban Design Program at UCLA's Graduate School of Architecture and Urban Planning, and he has also taught at Yale, Carnegie-Mellon and Cambridge universities. In spring 1999 he was the University of Virginia's Thomas Jefferson Professor.

Mitchell holds degrees from the University of Melbourne in Australia, Yale and Cambridge University. He is a fellow of the Royal Australian Institute of Architects and of the American Academy of Arts and Sciences, and in 1997 he was awarded the annual Appreciation Prize of the Architectural Institute of Japan. He is currently chair of the National Academies Committee on Information Technology and Creativity.

Terry Knight, associate dean of the school of architecture and planning, will chair the advisory committee to the provost in the selection of the new dean. The other members of the committee are professors Rodney Brooks, Charles Correa, Michael Dennis, Langley Keyes, Mitch Resnick and Ann Spirn.

A version of this article appeared in MIT Tech Talk on January 8, 2003.