Science to meet religion in Kresge 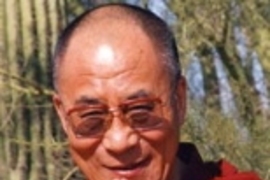 They'll be together on Kresge Auditorium's stage this weekend when the Dalai Lama and other Buddhists discuss the nature of consciousness with cognitive scientists and neuroscientists from MIT and elsewhere.

The Dalai Lama has held small, private workshops each of the past several years, inviting well-known scientists to make presentations and then discuss issues of human behavior and ethics raised by those presentations. Last year Professor of Biology Eric Lander, director of the Whitehead Institute/MIT Center for Genome Research (soon to be the Broad Institute), attended such a meeting in Dharamsala, India, seat of the Tibetan government in exile. Lander subsequently helped arrange for this weekend's meeting to be held at MIT--the first public science conference with the Dalai Lama.

What does a geneticist know about cognitive science?

"I know from nothing about the mind," Lander said with a laugh in a recent interview. "I'm a geneticist. But genetics raises a lot of ethical questions. And Buddhists want to learn more about science and ethics, to discuss how we should behave, what choices to make."

Lander said he was impressed with the "extraordinary thoughtfulness" of the Dalai Lama when he met with him and other Tibetan monks in Dharamsala. "He radiates a happiness and serenity which is really quite remarkable, especially considering that he is a head of state living in exile. It's amazing that he shows no frustration, no resentment.

"I detected no agenda. Sometimes religion attempts to co-opt science for its own agenda--but the Buddhists wanted to understand, to listen with an open mind and learn about science," said Lander, who is not a Buddhist.

While Buddhism is clearly a religion, the philosophy at its core demands its practitioners to question the meaning of existence and explore the nature of consciousness--just as science requires its practitioners to poke and prod to discover the natural laws behind physical phenomena. As Lander put it, "Buddhism places great importance on discussion, debate and logic, and little emphasis is placed on authority with respect to answers. In fact, the Dalai Lama made it clear that his was just one opinion and each must work out the answers for himself."

One such example was the Dalai Lama's response to a question put to him by a scientist who asked about the ethics of using animal tissue or animals in scientific research.

"It would have been so simple for the Dalai Lama to say, 'That is wrong.' But he didn't. Instead he said, 'I can't tell you whether you should or should not do it. There's clearly mixed karma that will arise and will develop 50 years from now,'" said Lander. "He said the karma will depend on the results of the act and the motivation of the researcher. You must ask yourself: What are my motivations? What are the outcomes?

"If most of the polarized debates in society could be examined in that way, it would be great. It's interesting that the Dalai Lama would ask, 'What's in your heart?' and include that in the calculus," Lander said.

"Some may regard the notion of Buddhism and science talking as a little flaky. But I think it's wonderful that at MIT we are open to listening to and absorbing new modes of thought," said Lander, who believes the ability to control the mind through meditation could provide a fertile field for neuroscience and cognitive sciences. "Just as the body of a highly trained athlete provides information about the human body, so will a person who has trained to meditate seven or eight hours a day be informative to study."