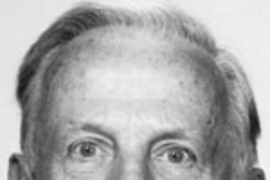 Charles P. Kindleberger, an economic historian and authority on international monetary affairs who was a leading architect of the Marshall Plan after World War II, died on Monday, July 7 of a stroke at Mount Auburn Hospital in Cambridge. He was 92.

Kindleberger, who lived in Lexington, was the Ford International Professor of Economics Emeritus at the Massachusetts Institute of Technology. He retired in 1976 after 33 years of teaching, writing and research at MIT. His career included appointments at universities throughout the world as well as government service and financial industry leadership.

Kindleberger described his around-the-clock work to develop and launch the Marshall Plan, also known as the European Recovery Program, with singular passion in a 1973 interview.

"We were conscious of a great sense of excitement about the plan. Marshall himself was a great, great man -- funny, odd but great -- Olympian in his moral quality. We'd stay up all night, night after night. The first work ever done that I know about in economics on computers used the Pentagon's computers at night for the Marshall Plan. I had a tremendous sense of gratification from working so hard on it," Kindleberger said.

During World War II, Kindleberger served in the Office of Strategic Services in Washington and London until he became a major in the 12th Army Group in Europe. After the war, he served as chief of the Division of German and Austrian Economic Affairs and as chief of the committee that prepared cost estimates for the European Recovery Program. He was a key advisor on German reparations.

Kindleberger came to MIT in 1948 as an associate professor of economics, becoming a full professor in 1951 and later the Ford International Professor of Economics. Following his retirement in 1976, he continued as a senior lecturer until 1981.

Kindleberger was a member of former President Lyndon B. Johnson's Committee on International Monetary Arrangements. While on leave in 1967-68, he assisted five black colleges in Atlanta, Ga., in teaching and helping develop economics programs and course offerings. He became a trustee of Clark College in Atlanta and a member of the United Negro College Fund.

He served as an economist for the Federal Reserve Bank of New York and held similar positions with the Bank of International Settlements in Switzerland and the Board of Governors of the Federal Reserve System. He was president of the American Economic Association in 1985.

Kindleberger wrote 30 books, one before World War II and the other 29 beginning in 1950. His initial research focused on foreign exchange -- an early work, "International Economics," went through five editions during its 25 years of use as a standard economics textbook.

His most recent substantial monographs were "Centralization vs. Pluralism," and "World Economic Primacy, 1500-1990," both published in 1996.

Kindleberger had honorary degrees from the Universities of Paris, Ghent and Pennsylvania. He was a member of the American Academy of Arts and Sciences, the American Philosophical Society, and a consulting fellow of the British Academy.

A reception will be held in his memory for family and friends from 3 to 5 p.m. on Saturday, July 12, at the Brookhaven retirement community, 1010 Waltham St., Lexington, Mass. Donations in his memory may be made to the Kindleberger Library Fund for Economic History, MIT Libraries, Room 14S-216, 77 Massachusetts Avenue, Cambridge, MA 02139.