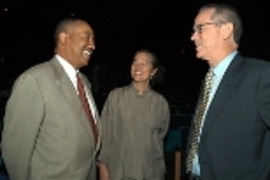 Arthur Jones, a political and media consultant recently based in Washington, D.C., has been appointed director of the MIT News Office, effective Aug. 25, announced Kathryn Willmore, vice president and secretary of the Corporation.

In Washington, Jones has served as deputy White House press secretary and director of public affairs for the court-appointed receiver of the District of Columbia Housing Authority.

"After several years in public service, it is an honor to join a traditional leader in service to the nation and the world--a voice of authority in science and technology," Jones said.

Before moving to Washington, Jones lived and worked in the Boston area. In the late 1980s and early '90s, he served as director of communications for the city of Boston in the administration of Mayor Raymond L. Flynn and before that, as assistant press secretary to Gov. Michael S. Dukakis.

Prior to that, Jones was an award-winning journalist in both television and print media. He received a New England Television Emmy Award while serving as news manager at WBZ-TV in Boston, and he received a team Pulitzer Prize while working as a reporter at The Boston Globe.

"I'm delighted that we were able to bring someone of this caliber and experience to this key position, and hope that you will find an opportunity to welcome him to MIT," said Willmore.

A version of this article appeared in MIT Tech Talk on August 27, 2003.