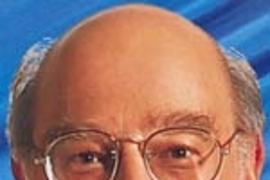 A nationally known information systems executive and MIT alumnus with 30 years of experience in technology management for government, industry and nonprofit organizations has been appointed vice president for information services and technology at MIT.

"MIT has always had a central role in advancing the state of the art of computer and communication technologies--technologies that have become integral to its own mission as a launching place for people as well as for scientific breakthroughs," said Grochow, a New Jersey native. "I'm very excited about being able to use my experience and energy in furthering MIT's mission."

"I'm delighted that Jerry Grochow is joining MIT as vice president for information services and technology. Information technology is increasingly central to our work--to teaching, to research and to administration," said President Charles M. Vest.

"Under Jim Bruce's leadership, we have been a national leader in these areas; the appointment of Jerry Grochow, an experienced innovator, will ensure our continued success. Dean [Robert P.] Redwine and his colleagues on the search committee deserve our thanks for a tough job well done," Vest said. Redwine, dean for undergraduate education, served as chair of the search committee charged with finding Bruce's successor.

Executive Vice President John Curry said, "As befits MIT, we set the highest professional standards for technological competence and service delivery to guide the search. And the committee was as intense and thorough in evaluating candidates as they were demanding in their expectations. Provost Bob Brown and I are enormously pleased with the outcome and with the process. Jerry Grochow cleared every hurdle, and we welcome him to arguably his highest calling: MIT."

"The committee worked hard to identify candidates who had not only the knowledge and experience appropriate to the position, but also the style and approach which would lead to success in the MIT environment," Redwine said. "I'm extremely happy that Jerry Grochow has agreed to accept the position. His background and vision and his customer-based focus make him very well suited to lead IT services and planning at MIT in what is clearly an exciting and challenging time. I thank my fellow members of the search committee for their hard work and wisdom and I congratulate them on their success."

An avid skier and amateur astronomer, Grochow is looking forward to "taking on the challenge of ensuring that academic, research and administrative IS takes advantage of technological advances that can help in achieving MIT's research and academic goals," he said.

Grochow has spent most of his professional career in companies based in the Washington, D.C./Virginia area.

As chief technology officer to FOLIOfn, Inc. since 1999, Grochow led a team of 100 in developing this innovative, entirely web-based financial and investing service. He and his staff were also responsible for a round-the-clock operation providing high-availability online brokerage services to thousands of customers.

As a consultant since 2002 to the not-for-profit MITRE Corporation, Grochow is working with the U.S. Treasury Department's Office of Critical Infrastructure Protection on R&D for improving the resiliency of the banking and financial sector. He is also working on the Internal Revenue Service's $1 billion Business Systems Modernization program.

Grochow spent 27 years with American Management Systems, Inc., a consulting company in Fairfax, Va., where as chief technology officer (1992-99), he had overall responsibility for identifying and introducing new technology into AMS' system design and development activities. He founded AMS' Center for Advanced Technologies in 1992. Under his direction, the center became known as a model for industrial R&D labs providing value to their parent and client organizations through extensive education, publication and marketing activities, as well as developing prototypes of key e-business applications.

Early in his career at AMS, Grochow managed a project even the IT novice would equate with "challenge:" he was responsible for designing the budget control system for the City of New York in the mid-1970s.

He is the author of two books, "SAA -- A Guide to Implementing IBM's Systems Application Architecture" (1991) and "Information Overload -- Creating Value with the New Information Systems Technology" (1996). He has been quoted in Business Week, Fortune and Forbes on IT issues, and his own articles have appeared in Computerworld, CIO, and eWeek.

Grochow, a member of MIT's Sponsored Research Visiting Committee until his new appointment here, gladly anticipates his full-time return to the Institute, he said.

"I can't think of a greater opportunity than being able to serve the institution where I got my start. MIT has been a special place for me and my family for many years," Grochow said.

Though Grochow did receive three MIT degrees--the S.B. in electrical engineering (1968), the S.M. in electrical engineering and computer science (1968) and the Ph.D. in management information systems (1974)--his "start" here was more than academic. He met his wife, Louise (S.B. 1971), at MIT when they were both undergraduates. (A doctor, she is a visiting professor at Johns Hopkins and the National Cancer Institute's Investigational Drug Branch Chief.) Their daughter, Rebecca (S.B. 2001) was vice president of the InterFraternity Council, and their son Joshua is a junior studying mathematics.

Grochow also serves as his family's Home Network Administrator--the one challenge he describes as "taking more time and energy than it should."