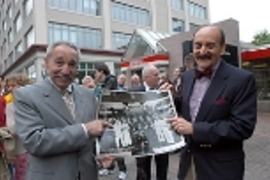 ↓ Download Image
Caption: Maynard Tishman (left) and Marvin Fox point to their fathers in a photo of the F&amp;T Restaurant in Kendall Square, which was demolished in the 1980s. The fathers, Isaac Fox and Robert Tishman, opened their doors in 1924 and passed the business on to the next generation.
Credits: Photo / Donna Coveney 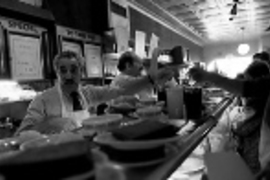 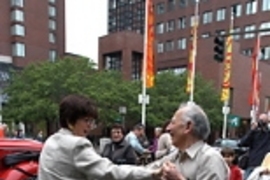 Caption:
Maynard Tishman (left) and Marvin Fox point to their fathers in a photo of the F&amp;T Restaurant in Kendall Square, which was demolished in the 1980s. The fathers, Isaac Fox and Robert Tishman, opened their doors in 1924 and passed the business on to the next generation.
Credits:
Photo / Donna Coveney

Caption:
Tishman (left) and Fox, hard at work at the F&amp;T shortly before it closed.
Credits:
Photo courtesy / MIT Museum

Dozens of denizens of the former F&T Restaurant gathered last week to share memories at the June 5 dedication of a plaque commemorating the bygone eatery, which once stood at the site of today's Kendall Square inbound subway entrance.

The F&T was a legendary spot for good food, beers and free-ranging conversation "where town truly met gown," said Professor of Physics Rainer Weiss, who spearheaded the effort to memorialize the restaurant.

In attendance were Marvin Fox and Maynard Tishman (F&T), who inherited the business from their fathers. They sold it to a developer as the area began its building boom in the 1980s; the restaurant and adjoining diner of the same name were demolished shortly thereafter.

When the F&T opened in Kendall Square in 1924 and for many years thereafter, "there were no other restaurants in the area," which was mostly abandoned industrial buildings, noted Professor of Chemistry Irwin Oppenheim (who coincidentally attended grade school in Roxbury with Maynard Tishman). Over the years, the F&T soon became a magnet for a mixture of local workers and MIT people. The owners and employees greeted regular costumers by their first names, whether they were truck drivers, politicians or distinguished professors.

Some of those customers fondly recalled sitting at a round table next to a buzzing neon beer sign, eating hot pastrami sandwiches or meatloaf with coffee or a beer, shouting to be heard over the din. "For some reason, there was a magical quality," Weiss said. "Many of us had our best ideas in that place."

"We talked shop, we talked about science, we talked about politics, we talked about anything and everything," said Shaoul Ezekiel, professor of aeronautics and astronautics. "John King [professor of physics] always dazzled us with his ideas for weird and impossible experiments ... Who can forget Jerry Lettvin [professor of electrical engineering and computer science] and his enlightening discussions on the brain? And Rai Weiss, the bushy-haired guru who knew everything from physics to piano-tuning, tackled every scientific problem that came up, writing on napkins and backs of envelopes."

Isaac Fox and Robert Tishman, who arrived in America with their families around the turn of the last century, opened their restaurant in Boston's West End in 1919 and later relocated to Roxbury and then Kendall Square. They weathered the Depression, distributing toys to needy children at Christmas as well as a free meal here and there. The partners eventually married two sisters, so their sons were cousins who carried on the business after their fathers retired.

"We had a wonderful partnership--we had complete trust," Marvin Fox said last week.

Their children in turn worked at the restaurant, doing everything from waitressing to making the signs advertising lunch specials like liver and onions for $3.50. One of them, Debra Fox (a training manager for a restaurant chain), flew in last Thursday from Florida for the occasion as a surprise to her parents.

At the ceremony, Ezekiel broke into an impromptu dance with Susan Lester, associate secretary of the MIT Corporation, to the strains of Professor Emeritus Jay Keyser's New Liberty Jazz Band playing atop an antique fire truck parked on Main Street.

Music was also part of the restaurant's atmosphere. Lester recalled Fox singing "If You Knew Suzie Like I Knew Suzie" as she came in. Added Professor of Management Gordon Kaufman, "Where else in the world could a Michigan-born prof come into a restaurant to the refrain, 'Oh how I wish again, I was in Michigan, down on the farm!' sung by Marvin Fox in a lovely tenor voice?"

"I'm very proud that many of our customers became our friends," Tishman said.

When the F&T Restaurant closed, Professor Jerome Lettvin composed a dirge in its memory. He read it to much laughter and applause at last week's commemoration:

There's no pub
in the Hub--
only singles bars
and bistros run by hockey stars.

There's no fare
in the Square--
only Harvard Yard
and clip-joints that take a credit card.

What they sell
at Lobdell
is recycled sludge
prepared to nourish, at best, a grudge.

Sky and school and spirit are gray--
Where can we eat in a civilized way?

Fox and Tishman, Tishman and Fox,
dealt us compassion with bagels and lox,
meatloaf with morals, lentils with leers--
they warped our palates as we bent their ears.
Execs and secs, jocks and crocks
lunched in leisure at Tishman and Fox.

Now this bastion
has cashed in.
The sagging ceiling, the flaked chrome
that gave us home
are no more to be.