Dollhouse to be raffled to benefit AIDS organization 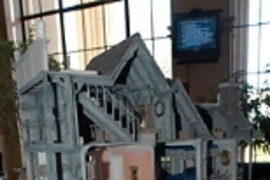 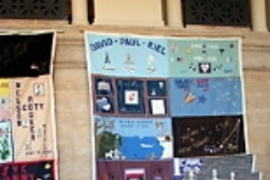 ↓ Download Image
Caption: Zoe Malliaros of the Children's AIDS Program at Boston Medical Center (left) and Carolyn Parker, vice chair of the MIT Women's League, check out the sea captain's dollhouse donated by Ronald L. Dion to the Women's League as a raffle item for World AIDS Day to benefit Cambridge Cares About AIDS. Behind them in Lobby 10 are squares from the memorial AIDS quilt.
Credits: Photo / Donna Coveney

Caption:
Zoe Malliaros of the Children's AIDS Program at Boston Medical Center (left) and Carolyn Parker, vice chair of the MIT Women's League, check out the sea captain's dollhouse donated by Ronald L. Dion to the Women's League as a raffle item for World AIDS Day to benefit Cambridge Cares About AIDS. Behind them in Lobby 10 are squares from the memorial AIDS quilt.
Credits:
Photo / Donna Coveney

The MIT Women's League is raffling off a four-story, Federal-style dollhouse with hidden staircases, secret passages and a history reminiscent of a Victorian novel as part of its fund-raiser to mark World AIDS Day.

Built by Ronald L. Dion, former set designer for the Turtle Land Theater in Newton, the 34-by-30-inch dollhouse comes with its own history provided by Dion, who donated it to the Women's League. The story goes:

"A middle-aged English sea captain sailed to Boston, where he fell in love with a lovely young woman from Maine. They married and the captain built them a home on the coast of Maine overlooking the ocean.

"Because he was a sea captain, he spent extended periods at sea. (A model of the first sailing ship he owned is displayed on the living room wall.) He stocked crates of treasure in the attic for his wife in case of his early death. These treasures can be accessed by a series of secret passages and stairways.

"Some years later, weary of waiting for her captain's return, the woman sailed off for England with their young child to be reunited with him. During the voyage, she and the child died when their ship met a violent storm and sank.

"The captain was so distraught he spent the rest of his life in the Maine home hoping that his wife and child would return. Her portrait hangs in their bedroom, where he placed a bouquet of flowers on her dressing table each day. He walked for countless hours on the porches and through the rooms, especially the dining room, his favorite vantage point. It is said that the odor of smoke from his pipe and the fragrance of flowers remain to this day, haunting this house where he died."

Other World AIDS Day events sponsored by the Women's League in Lobby 10 on Dec. 1 included a chocolate buffet, information tables and another raffle. All proceeds go to Cambridge Cares About AIDS, a multicultural, nonprofit agency that provides comprehensive client services to people living with HIV and AIDS. The Women's League raised $2,600 last year with its World AIDS Day activities.

A version of this article appeared in MIT Tech Talk on December 3, 2003.