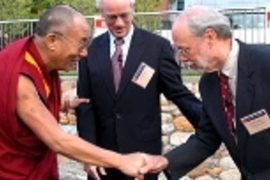 ↓ Download Image
Caption: The Dalai Lama, left, is greeted by MIT President Charles M. Vest, center, and Phillip A. Sharp, director of the McGovern Institute for Brain Research at MIT, which co-sponsored the event with the Mind and Life Institute.
Credits: Donna Coveney 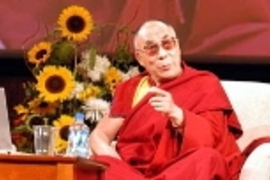 ↓ Download Image
Caption: His Holiness the Dalai Lama, above, at the MIT conference "Investigating the Mind: Exchanges Between Buddhism and the Biobehavioral Sciences on How the Mind Works."
Credits: Donna Coveney 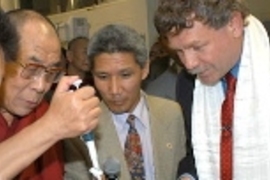 ↓ Download Image
Caption: The Dalai Lama. left, pipettes isopropel into mouse DNA during a tour of the Whitehead Institute/MIT Center for Genome Research. To his left is his translator, Thupton Jinpa, and Eric Lander, director of the center.
Credits: Donna Coveney

Caption:
The Dalai Lama, left, is greeted by MIT President Charles M. Vest, center, and Phillip A. Sharp, director of the McGovern Institute for Brain Research at MIT, which co-sponsored the event with the Mind and Life Institute.
Credits:
Donna Coveney

Caption:
His Holiness the Dalai Lama, above, at the MIT conference "Investigating the Mind: Exchanges Between Buddhism and the Biobehavioral Sciences on How the Mind Works."
Credits:
Donna Coveney

Caption:
The Dalai Lama. left, pipettes isopropel into mouse DNA during a tour of the Whitehead Institute/MIT Center for Genome Research. To his left is his translator, Thupton Jinpa, and Eric Lander, director of the center.
Credits:
Donna Coveney

CAMBRIDGE, Mass.--The chatter of 1,200 people ceased when the Dalai Lama appeared on the Kresge Auditorium stage to start the conference "Investigating the Mind: Exchanges Between Buddhism and the Biobehavioral Sciences on How the Mind Works."

The audience stood as His Holiness was shown to his seat, one of two white overstuffed chairs in a semicircle of smaller chairs. He bowed slightly with his palms pressed together to the scientists and Buddhists around him and to the audience, then playfully shielded his eyes as if from the noonday sun and peered out, giving a little wave to someone he recognized, much to the delight of the audience in Kresge Auditorium, who laughed along with him.

His entrance, at once respectful and pleasant, set the metaphorical stage for the conference to follow, an event in which scientists and Buddhists discussed their perspectives, personal experience and research with a keen respect, humility and joy rarely, if ever, seen in the academic conference world.

In his introduction of the Dalai Lama, who received the Nobel Peace Prize in 1989, fellow Nobel laureate Phillip Sharp, professor of biology and director of the McGovern Institute for Brain Research at MIT, told the audience that he had heard the head of the Tibetan government say, "If he were not a monk, he would have liked to have been an engineer."

Adam Engle of the Mind & Life Institute, which cosponsored this conference along with the McGovern Institute, praised President Charles M. Vest and the staff members of MIT and the Whitehead Institute/MIT Center for Genome Research by quoting a Buddhist saying:

"Judge the quality of the teacher by looking at the actions and motivation of the students. The same is true for organizations," Engle said. "In my entire professional life I've never worked with an organization that so successfluly blends integrity and organization along with the human qualities of kindness and respect. This says a great deal about Dr. Vest's leadership of MIT."

"Many of us believe that understanding the human brain and mind will be the great scientific adventure of the 21st century," Vest said during brief remarks in which he lauded conference participants for looking into the "ultimate mystery of consciousness, of which we in Western science speak only haltingly, yet which as human beings we all ponder with awe."

The MIT conference, on Saturday and Sunday, Sept. 13-14, engaged scientists and Buddhists in a dialogue about the nature of reality, to see what scientists can learn from the minds of Buddhist monks who spend long hours in meditation. The MIT event was preceded by a news conference at the Charles Hotel in Cambridge on Friday and followed by a public talk at Boston's Fleet Center on Sunday evening.

The Dalai Lama, head of the Tibetan government in exile since 1959, resides in Dharamsala, India, and regularly invites scientists to visit for dialogue, which is a traditional Buddhist method of discovering truth. The MIT conference was the 11th such meeting, the first that was made public. It sold out quickly.

The Dalai Lama, who is believed by his followers to be the 14th reincarnation of the Bodhisattva (Buddha) of Compassion, stood at the dais with his translator, Thupten Jinpa, but first addressed the audience directly in quiet, accented English. As he searched for just the right English word to describe his meaning, he gesticulated with his right arm, left bare by the traditional Tibetan Buddhist robes he wore of bright yellow and red.

His message was at once simple and profound: we should learn what makes a happy mind and teach those methods so that all of humanity will be happy.

"I'm seeking scientific backing or findings in order to help everybody have a happy mind," said the Dalai Lama. "Everybody is making an effort for material comfort but not as much effort to be happy." He said he hopes that by studying the minds and bodies of Buddhist monks and other saddhus (ascetic holy men) who, through meditation techniques, have developed extraordinary control over their mental and physical processes, scientists will be able to help all of humanity to achieve a happy mind.

"Regardless of one's individual reaction or beliefs about [saddhus, who can remain naked in snow for months without physical harm], I think it is important to try to understand the physiology of the individuals who have such capacity," he said.

Anne Harrington, a Harvard professor of the history of science and former consultant on mind-body interactions for the MacArthur Foundation who served as one of the moderators, sat beside the Dalai Lama in the other white chair at the apex of the semicircle of chairs on stage.

She cautioned scientists and Buddhists alike not to be "intoxicated by the exoticism of this meeting, nor to let the presence of His Holiness prevent us from speaking our minds. We want to be open-minded but also tough-minded," said Harrington.

Although the discussion was serious, the Dalai Lama exhibited a natural playfulness unusual in a head of state. During a talk at the podium by Evan Thompson of York University, the Dalai Lama sneezed. Because the microphone attached to his robes was still turned up high, the sneeze exploded through the auditorium. After a startled moment of silence, laughter erupted from the audience as the Dalai Lama waved his tissue a little and showed a gentle amusement at this very human experience.

It did seem for that moment at least that the audience members had happy minds.