Stanley Backer, international leader in the field of fiber and polymer research, dies at 82 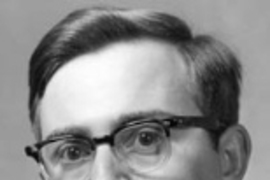 MIT Professor Emeritus Stanley Backer, an international leader in the field of fiber and polymer research, died at home in Newton on Jan. 18 of kidney failure. He was 82.

Professor Backer was head of the Fibers and Polymers Laboratory of MIT's Department of Mechanical Engineering from 1962-89. His approach to textile engineering combined an understanding of the physical properties of individual fibers with an analysis of the structural geometry of the fibers within fabric, allowing the prediction of fabric behavior based on the properties of the component yarns. His studies had application not only to the design of new types of fabrics, but also to the use of fiber reinforcement of nonfibrous material such as cements, and to the behavior of fibers in marine rope.

In addition to his work on textile mechanics, Professor Backer led a pioneering program to set up an online computer retrieval system for textile information in the mid-1960s. Sponsored by the U.S. Department of Commerce, the program was designed to provide an effective language interface between people and manual storage systems and the immense data handling capacity of computers. The Textile Information Retrieval Project produced a comprehensive thesaurus of textile terms, comprising 8,000 keywords and 72,000 related terms, which was translated into seven languages. The system was one of the first functional online information retrieval systems, allowing simultaneous access to a database of textile information by up to 25 separate users on two continents.

Professor Backer earned the S.B. in engineering and manufacturing in 1941 from MIT. He then joined the Army, where he did research for the U.S. Quartermaster. In 1944 he completed his service as a major and continued work for the Quartermaster as a civilian, organizing and heading the Quartermaster's Textile Engineering Laboratory in Philadelphia.

He returned to MIT to complete his S.M. in textile technology in 1948 and his Sc.D. in mechanical engineering in 1953. He was appointed to the MIT faculty in 1951 as an assistant professor and in 1962 was promoted to full professor and head of the Fibers and Polymers Laboratory. He retired in 1989, at which time he took the title of professor emeritus. He continued to teach, supervise graduate students and write; he completed his last book, a history of textile engineering at the Institute titled "100 Years of Textiles at MIT," in 2002.

Professor Backer trained a generation of textile scientists who have gone on to leadership positions in industry, government and academia. Professor Nam Suh, former head of the Department of Mechanical Engineering, said of Professor Backer: "Stanley was a gentle soul, a teacher among teachers. He collaborated with a number of people and had a very positive impact on the department. He was always very calm and supportive, and very dedicated to his students."

B.J. Park, a former student of Professor Backer who is now president and founder of Merchandise Testing Laboratories in Brockton, Mass., said that Professor Backer served as much more than simply a research advisor: "Stanley has been my professor and mentor and has made me what I am today. I am deeply saddened by his departure from this world."

Professor Backer held seven patents and co-authored three books, and was author or co-author of more than 90 research publications. Among his many awards and honors was the Carothers Medal for creativity in the production or use of fibers, which he received from the Textile institute in 1992, the same year he was elected to the National Academy of Engineering. He also was awarded the Harold DeWitt Smith Award from the American Society for Testing and Materials in 1962.

He was active in a number of professional societies and government committees, most notably, he was chairman of the ad hoc Textile Research Committee of the National Academy of Sciences/National Research Council In 1961. He was a consultant to DuPont for nearly 40 years, and served on the editorial boards of many scientific journals.

Professor Backer was born in Boston on Feb. 9, 1920. He graduated from Boston Latin School in 1937 and married Esther Ross in 1949. Professor and Mrs. Backer have lived in Waban, Mass. (a section of Newton) for 47 years, where they raised two sons.

In addition to his wife, Professor Backer is survived by his sons, Richard of Berkeley, Calif., and Jonathan and his wife Amy of New Rochelle, N.Y., and three grandsons.