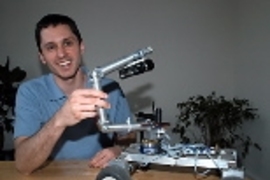 By day, he tweaks robots designed to probe distant planets. At night, he explores rocky emotional landscapes with his prize-winning short fiction.

A research scientist in the mechanical engineering department, Iagnemma (S.M. 1997, Ph.D.) has just released his first collection of stories, titled "On the Nature of Human Romantic Interaction." With tales of mathematicians, phrenologists and plant experts in love, he presents readers with a nuanced picture of scientists rarely found in the world of fiction.

"The stereotypical view of the scientist or researcher is that they're very cold and rigorous and analytical, but of course they're people too," Iagnemma said. "Even doing something very abstract, very mathematical, there's room for emotion."

The characters in the book aren't only emotional scientists, they are scientific emotionalists. The title story, for example, features a man who tries mathematically to model his relationship with his girlfriend. The idea came from a class in nonlinear control that Iagnemma took while working toward his master's degree.

"One of the students set up a mathematical model of interacting people," he said. "He ended up with a long inequality proving that if you satisfied the conditions, the people would come together. It was brilliant and funny and a little bit sad."

Iagnemma began to write fiction as an undergraduate at the University of Michigan. After he came to MIT, he started sending stories out for publication. Soon they were appearing everywhere, from Playboy to the Paris Review to a Pushcart Prize collection. His story "Zilkowski's Theorem" was included in the anthology "Best American Short Stories 2002."

Toward the end of his work on his Ph.D., Iagnemma realized that he had written enough stories for a book. "Within a couple of months I finished the book and had the thesis done," he said. " It was about the best two-month period of my life."

The stories in "Romantic Interaction" are unified by themes of loneliness and lost love, but Iagnemma splashes humor across nearly every page, further humanizing his scientist subjects. He also shows a predilection toward historical fiction, setting several of the stories in pre-1900 times.

"There's a weird perception that people were dumber back then, because we know the answers to the problems that they were trying to solve," he said. "It's hard to appreciate the challenges, but we are just as lost in quantum physics as those guys were on some steam engine problem."

With the book out and a rapidly expanding collection of glowing reviews, Iagnemma is often asked if he plans to quit his day job, a scenario that seems distasteful to him.

"If I was just writing, I would definitely miss doing research," he said. "And I get half my ideas from being around here. What I'd love to do is keep doing both, as long as I can stay awake."

For more information about the book, the author and upcoming readings, see http://www.karliagnemma.com.