Students get face time with astronauts 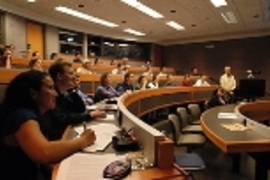 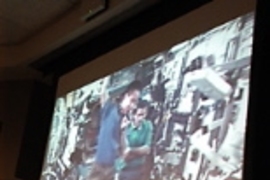 The astronauts seemed eager to talk with their guests, even if they were disembodied voices from Earth. Lu, American astronaut and science officer on the International Space Station (ISS), described the view of thunderstorms from space and his theory that the frequency and duration of lightening strikes follow a power-law distribution.

They stood side by side in a corridor that looked a lot like a movie spaceship. Their motionless stance amid a silent background was unearthly: their feet were apparently in restraints, their knees slightly bent, torsos leaning back a tad as if on ice skates. Lu held his arms at his sides; Malenchenko's were crossed across his chest.

The video teleconference, requested by Lu, was arranged through NASA's Houston command center. ("Alpha, this is Houston. Are you ready for the event?" said a voice to start things off.)

Students' questions for the carefully orchestrated, 20-minute conversation were submitted in advance to the astronauts by Jeffrey Hoffman, a former astronaut who is now professor of the practice in the Department of Aeronautics and Astronautics. Hoffman instructed the students on how to introduce themselves, how to phrase their questions and how to speak into the microphone at their seats without pausing between sentences, so the five- or six-second sound delay wouldn't cause conversational pandemonium. The 20 or so people in the room remained nearly silent to keep the synchronized conversation uncluttered.

Graduate student Phil Ferguson asked Lu about his "flying" technique on the ISS (walking is impossible, of course). Lu replied that Newtonian mechanics are obvious in zero gravity; a body in motion will remain in motion until force is applied, and a body at rest will remain there.

Lu cheerfully described one of his first uncontrolled flights through the space station. It isn't possible to adjust your direction or stop once you're in the air, he said, so if you kick off at the wrong angle, you'll keep going in the wrong direction until you bump off a wall and head in another direction. The trick, he said, is learning to aim your body correctly, and applying torque if you use a handrail to push off.

"In order to turn yourself easily," said Malenchenko in response to another question, "you just have to bend your knees." As he spoke, he bent his knees just a bit and almost immediately was turning somersaults in the air. Afterwards, Malenchenko made a motion with his hands as if to say, "Ta-daaa." Delighted laughter filled Room 9-057.

Malenchenko's answers were translated into English by a woman's voice from NASA. The same voice translated students' questions into Russian, except for that of Georgi Petrov, a graduate student from Bulgaria, who asked in Russian to what extent the astronauts personalized their home.

Malenchenko replied in Russian, "I customized my quarters by putting pictures of people I love all over the walls." But before he answered, he complimented Petrov on his Russian. "Your Russian is very good," he said in English.