Competition goes to the Dogs 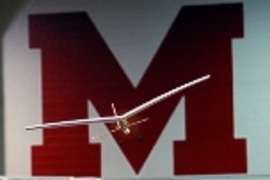 The soft whirr of the tiny engines was barely audible over the white noise of the air circulation system as the remote-controlled planes circled around the huge room resembling an aircraft hangar. Spectators sometimes had to duck or run backwards toward the bleachers when a plane made a sudden dive or took a curve too widely.

The Johnson Athletic Center's indoor track proved the perfect spot for the aero/astro's unified aerial competition. With its visible trusses, metal roof and roaring air system, spectators might imagine they heard the distant roar of jets outside. Inside, teams of sophomores took turns flying their six-foot-wingspan, handmade planes in a competition to see which could stay in the air longest. On some laps around the room, the planes carried hard-boiled eggs as tough little passengers whose number, safety and boarding time became part of the criteria for success.

Joshua Walton of the first-place Pukin' Dogs piloted his team's plane to success, in flights that lasted 37 seconds without passenger and 303 seconds with four egg-passengers. Pit time for boarding the eggs was only 14 seconds. The Pukin' Dogs team members--Omar Bashir, Jennifer DeBoer, Raymond Hill, Nicholas Hoff and Walton--had a total score of 912 points; the second-place team The Flying Fokkers, earned 613 points.

"A lot of science and engineering is accomplished through failure," said Charles Coleman (S.B. 1987), the Boeing Assistant Professor of Aeronautics and Astronautics who taught the final segment of 16.030/16.040 (Unified Engineering III and IV), a two-term course culminating in the two-day flight competition on May 1-2. He and Air Force Col. Pete Young, a senior lecturer in aero/astro, coordinated the 14-team competition. Young, "a world-renowned remote-control pilot," according to Coleman, trained the young pilots.

A version of this article appeared in MIT Tech Talk on May 7, 2003.