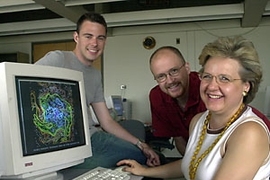 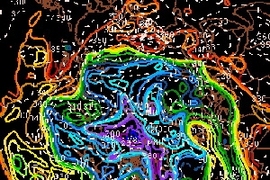 ↓ Download Image
Caption: A northern hemisphere tropopause map for Aug. 30 shows regions of low and high tropopause - the boundary between the troposphere and the stratosphere, which is on average about 10-12 kilometers high but which undulates as synoptic weather systems develop and decay. Purple/blue colors mark regions where the tropopause is low, while red/orange indicates the tropopause is high. Regions of anomalously low tropopause are associated with strong storm development. The tongue of purple/blue over the East Coast was associated with the storm over New England on the same day.
Credits: Photo / Donna Coveney

Caption:
Lodovica Illari (right), a lecturer in meteorology, and Rob Korty (left) and Greg Lawson, graduate students in earth, atmospheric and planetary sciences, are members of the MIT team that won a national weather forecasting competition.

Caption:
A northern hemisphere tropopause map for Aug. 30 shows regions of low and high tropopause - the boundary between the troposphere and the stratosphere, which is on average about 10-12 kilometers high but which undulates as synoptic weather systems develop and decay. Purple/blue colors mark regions where the tropopause is low, while red/orange indicates the tropopause is high. Regions of anomalously low tropopause are associated with strong storm development. The tongue of purple/blue over the East Coast was associated with the storm over New England on the same day.
Credits:
Photo / Donna Coveney

For the second consecutive year, an MIT team won first prize in the National Collegiate Weather Forecasting Contest, beating out some of the nation's leading programs in weather forecasting with the accuracy of its forecasts for eight U.S. cities.

The competition is organized by Pennsylvania State University, which has one of the largest programs in undergraduate meteorology in the nation, as do competitors Texas A&M and the University of Oklahoma. But the team from MIT's Department of Earth, Atmospheric and Planetary Sciences - which has no major in weather forecasting - relied on its understanding of the dynamics of the atmosphere to out predict its opponents.

Led by Lodovica Illari, a lecturer in meteorology, team members participate in the competition just for the fun of it.

"I do this extracurricularly to remind myself that there is weather," said Greg Lawson, a graduate student from Wilmington, Del., who is working on a new type of forecasting technique for his thesis research.

Lawson loved weather even as a child and remembers vividly the warnings that preceded Hurricane Gloria in 1985.

"I was 10 and stayed up all night, seeing adults cower and panic and shut down - they couldn't do anything about it," said Lawson, who thought science meant physics, chemistry and biology until he took an undergraduate earth sciences course at Yale and saw the light in the sky, so to speak. "It was right up my alley," he said.

He was visiting MIT's graduate program on April 1, 1997 when a 24-hour snowstorm shut down the city. The awesome storm was a deal-clincher.

Lawson has been on the team for five years. He and teammate Rob Korty of Portsmouth, Va., are staff meteorologists for The Tech, MIT's student newspaper.

Korty's thesis research is on a very different time scale from weather forecasts. He's studying dynamical processes in the atmosphere and ocean from the Eocene epoch to understand how the Earth's climate could have been so different 50 million years ago. (For instance, we know from fossil evidence and chemical oceanography that plants and animals requiring a tropical habitat lived north of the Arctic Circle back then.)

Korty's best forecast this year was for Richmond, Va., the capital of his home state. ("It was a pretty benign two-week period," he said). His favorite last year was Mt. Washington, where the highest recorded straight wind speed is 230 m.p.h.

For Lawson, Korty and their teammates - two undergraduates, four other graduate students, one postdoctoral researcher and Illari - competing in the weather forecasting competition brings them back to the here and now.

"The good teacher or the good forecaster is the one who can talk in plain language and make you understand," she said. "It's a dilemma for every forecaster: he wants to look like a scientist, like he's not just inventing, but it's hard to get this across in a simplified manner. The jargon sometimes covers a lack of understanding."

Forecasting has improved in the past decade, she said, mostly because of more sophisticated computer models. "The big weather centers say that a five-day forecast is as accurate today as a three-day forecast was 10 years ago," she said.

The key is starting with a clear understanding of present conditions within the larger picture. "Because the weather system is chaotic and a slight perturbation can have great impact, it's very important to describe the initial state as accurately as you can," said Illari. A long-term forecast requires a broader region of study than a short-term, she explained. To forecast the weather at Boston two days ahead, one looks at all of the United States. For three days, one adds the Pacific region. And for a week, the entire globe.

The competition lasts 20 weeks and pits more than 30 U.S. colleges against one another. Each team must prepare 36-hour forecasts over a two-week period for at least eight of 12 selected cities. Students look at the models every day, studying the maximum and minimum temperatures, and the amount and category of precipitation. Then they meet and discuss it. "Our group is small so we have better communication and we're more efficient," said Illari. "We've got a great group dynamic."

In addition to Illari, Lawson and Korty, team members still at MIT are graduate students Bill Ramstrom, Nikki Prive, Steven Tobias and Mike Ring, and postdoctoral associate Jeff Scott. Those who have graduated are Danielle Morse and Adam Harter.