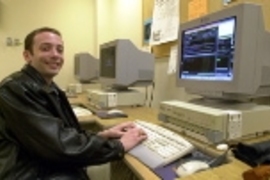 With $100,000 on the line, four computer programmers sat behind white screens on a platform, their lines of code appearing in real time on monitors set up around the room. Their friends read the code, joking quietly and expressing admiration.

Despite the stakes, a spirit of good-natured play prevailed at the April 19-20 finals of the TopCoder Collegiate Challenge, a national computer programming competition. Months of qualifying contests had narrowed a field of hundreds down to 16 semifinalists, who competed for the big purse at the University Park Hotel.

Two of the semi-finalists had MIT ties. Jon Salz (S.B. in computer science and engineering, 2001), now an MIT graduate student, was seeded sixth. Dan Adkins (S.B. in computer science and engineering, 2001), a graduate student at the University of California at Berkeley, was ranked fourth. Dan Wright of Stanford won the $100,000.

"Milhouse," as Salz is known during competitions, had plenty of support from friends and fraternity brothers, who claim credit for his nickname (based on a character from "The Simpsons" TV show). Many of the onlookers, graduate students who belong to Zeta Psi, have been friends with Salz since freshman year.

"Jon was ridiculously good at coding when he got to MIT. He was the kind of guy who could help you with your problem set even if he wasn't in the class," said Rich Hanna, an MIT graduate student in mechanical engineering who has known Salz since 1997. "All my friends are good at coding, but they're all good in different ways. I've never seen anyone who codes as fast or as accurately as Jon. And he's very self-deprecating about the whole thing. It's funny, because there's a lot of money to be won here."

Salz, aware of the nerdy reputation of programmers, suspects that his old, oversized eyeglasses may be to blame for his nickname. "Let's face it, I'm in a programming competition," he said. "I do have a few geeky tendencies." Appearances aside, his wit is anything but dull, exemplified by his comments in the competition's program book.

All contestants answered the same questions. Asked "What do you most enjoy about coding?" Salz said: "The chicks. The wind in my hair. The rush of adrenaline when I hit the 'submit' button."

During the semi-final round, he and the other three competitors wrote solutions to three problems of increasing difficulty in Java or C++. Salz did well with his code, finishing work on two of the three problems before time ran out. During the next part of the competition, the coders challenged one another's code.

Salz quickly saw that one competitor had written flawless code and would clearly win the round. So he launched into a game of computer Solitaire that brought cheers from the crowd, who showed the same zeal for Solitaire as they had for his code.
Salz won $11,450 during his year of competition, and plans to continue.

"I'm looking forward to 'extreme coding' becoming a sport in the 2003 X Games, but until then I'll have to content myself with jumping out of planes," said Salz, who is a member of the MIT Skydiving Club, the Sport Taekwondo at MIT and plays clarinet in the MIT Symphony Orchestra.

The first Topcoder competition last year was won by MIT graduate student Jason Woolever (S.B. 2000 in electrical engineering and mathematics, M.Eng. 2001), who earned the $100,000 prize in the TopCoder Collegiate Challenge in San Francisco.

A number of MIT students, faculty and researchers are among the 12,000 members of the TopCoder Collegiate Challenge organization, which organizes and hosts online and onsite programming competitions throughout the year. The contest was sponsored by Sun Microsystems.

A version of this article appeared in MIT Tech Talk on May 8, 2002.