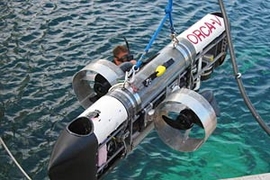 ↓ Download Image
Caption: The six-foot-long ORCA-V has two main thrusters at the side and two vertical thrusters at the bow and stern. There are two main dry compartments in the sub; the top one contains a computer that controls the sub, while the bottom one contains the batteries and the motor drivers.
Credits: Photo courtesy / Hongshen Ma

Caption:
The six-foot-long ORCA-V has two main thrusters at the side and two vertical thrusters at the bow and stern. There are two main dry compartments in the sub; the top one contains a computer that controls the sub, while the bottom one contains the batteries and the motor drivers.
Credits:
Photo courtesy / Hongshen Ma

CAMBRIDGE, Mass. -- Project ORCA, an MIT group for students interested in autonomous underwater vehicle technology, won the $5,600 first prize in the annual AUV competition organized by the Association for Unmanned Vehicle Systems International and the Office of Naval Research.

"The MIT team won first place in the 1998, 1999 and 2001 competitions, and we were victorious once again," said Hongshen Ma, a graduate student in media arts and sciences.

The goal of the AUV competition is to "advance the state of the art of AUVs by challenging a new generation of engineers to perform realistic missions in the remote underwater environment," according to contest organizers.

The format is similar to that of other robotics competitions, except the arena is underwater, which presents a whole new set of constraints and challenges for the designers. This year's competition took place in San Diego.

The arena is a 38-foot-deep elliptical pond in which 17 platforms with unique barcode markings are situated at various depths. A sonar "pinger" is set at the center to help the submarines navigate. Each AUV's goal is to locate and identify the platforms to produce an ordered list of barcodes and the corresponding platform depth. The teams are given 20 minutes to survey the platforms and five minutes to report the final result, Ma explained.

"The MIT team had a close call during the qualifying heat when one of the vertical thrusters failed and the vehicle sat idle for the first 18 minutes of the run," Ma said. "We did very well during the final run and narrowly edged Cornell for first place."