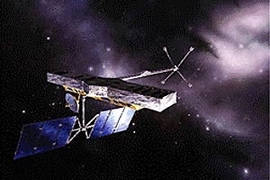 CAMBRIDGE, Mass. --The space observatories slated to replace the Hubble Space Telescope , which will become obsolete by 2010, were the focus of an IAP talk January 17 by Assistant Professor Olivier L. de Weck , who also discussed his own research in their design.

Each of the coming observatories will be very specialized, in contrast to the general-purpose Hubble. The observatories will also have significant advantages over their predecessor. "If you can't do 5 to ten times better than the previous generation, it's not worth the effort," said de Weck, of the Department of Aeronautics and Astronautics.

For example, the Next Generation Space Telescope (NGST) scheduled to be launched in 2009 "will usher in a new generation of space telescopes with aperture sizes and resolutions whose upper limits are not yet apparent," said de Weck. The NGST will focus on exploring the early universe and aid the search for dark matter. These types of observations require unprecedented levels of sensitivity, angular resolution and stability.

Meanwhile the Terrestrial Planet Finder , as its name implies, will explore our stellar neighborhood out to about 50 light-years, looking for extrasolar Earth-like planets and evidence of planet formation. This mission is particularly challenging, since it will rely on "nulling interferometry," a technique where light cancels itself out under certain conditions. The scientific rewards could be immense, since we might find out if Earth is truly unique in our immediate galactic "backyard."

The third observatory, the Space Interferometry Mission , will focus on stellar dynamics. "It will essentially create a very precise star map by measuring the angles between stars," said de Weck, "and it will do so more than 100 times more precisely than can be done now." Among other things, such a map will show how distant stars are moving, and will also indirectly aid the discovery of planets. Stars that "wobble," for example, are being "tugged back and forth by the gravity of one or several planets," de Weck said. The telescope will be able to detect those "very very small displacements."

De Weck's own research involves integrating the optics, control systems, structures and other disciplines that must work together on such complicated instruments. "Many of these instruments are so flexible and deployable that they cannot be fully tested on the ground ... this requires extensive upfront modeling and simulation," he said. "The problem is to find a design that is balanced between these multiple disciplines. How do you do so mathematically?"

The goal, he concluded with a smile, "is to make everyone's job equally hard." If all the different engineers and experts involved in the construction "scream at me equally, then I'll know I'm doing my job."