Huge magnet pulls world toward a new source of energy 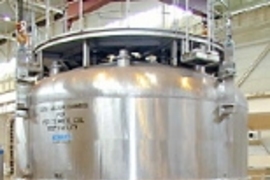 ↓ Download Image
Caption: This 150-ton magnet in Japan is crucial to an international experiment on nuclear fusion (a cover is held above it, ready to be put in place for a test run). Image courtesy Japan Atomic Energy Research Institute 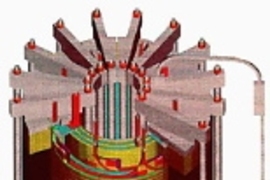 Caption:
This 150-ton magnet in Japan is crucial to an international experiment on nuclear fusion (a cover is held above it, ready to be put in place for a test run). Image courtesy Japan Atomic Energy Research Institute

A 150-ton magnet developed in part by MIT engineers is pulling the world closer to nuclear fusion as a potential source of energy.

Over the last three years "we've shown that we can design a magnet of this size and complexity and make it work," said Joseph V. Minervini, a senior research engineer at MIT's Plasma Science and Fusion Center and the Department of Nuclear Engineering.

He noted, however, that a better understanding of certain results is necessary to reduce costs for the researchers' ultimate goal: a magnet weighing 925 tons that will be key to the International Thermonuclear Experimental Reactor. That magnet, in turn, will be part of a total magnet system weighing some 10,000 tons.

Minervini, who leads the MIT team involved in the 150-ton project, will give a talk titled "Test Results from the World's Most Powerful Pulsed Superconducting Magnet" on Friday, Sept. 27 at 4 p.m. in Room NW17-218.

The goals of the International Thermonuclear Experimental Reactor (ITER) include demonstrating the feasibility of nuclear fusion as an energy source, in which Congress has recently shown increased interest. Last week a Department of Energy panel recommended that the United States rejoin the multination ITER collaboration. In 1999 Congress appropriated funding for completion of R&D commitments toward ITER, but not for an extension of U.S. participation in the project.

In nuclear fusion, light elements are fused together at enormous pressures to make heavier elements, a process that releases large amounts of energy. Powerful magnets provide the magnetic fields needed to initiate, sustain and control the plasma, or electrically charged gas, in which fusion occurs.

The 150-ton magnet in Japan is a test bed for the 925-ton magnet that will ultimately initiate and heat the ITER plasma. Two additional mammoth magnet systems will confine the plasma and control its shape. A model for one of these is currently being tested in Germany; a model of the second is planned.

The cylindrical 150-ton magnet has three principal parts: an outer module built by a Japanese team, an inner module built by a U.S. team, and a thin "insert" coil near the core that's fitted with instrumentation to "tell what's going on," Minervini said. Three different inserts have been separately tested; two of these were built by Japan, the other by Russia.

Three sets of tests on the magnet since 2000 have taught the engineers more about magnet performance on such a grand scale. The first test in 2000 showed that the inner and outer modules did indeed work (see MIT Tech Talk, May 3, 2000). Later in the same run, the researchers tested one of the Japanese inserts. The overall device produced a magnetic field of 13 tesla (about 260,000 times more powerful than the Earth's magnetic field) with a stored energy of 640 megajoules at a current of 46,000 amperes (about 3,000 times the current handled by typical household wiring).

Most importantly, however, team members found that they could successfully operate the magnet in pulses, bringing it to 13 tesla and back down in a few seconds. "The magnet is only doing its job for this particular magnetic fusion application when we're changing the magnetic field," or ramping it up and down, Minervini explained.

A superconducting magnet operated on a constant current, such as that used in magnetic resonance imaging of the body, suffers no dissipation of electrical energy. That's not true, however, when a superconducting magnet is pulsed. And tests of the new magnet in pulsed operation showed that "initially [the electrical] losses were much higher than predicted," Minervini said.

With repeated operation, however, the magnet appeared to correct itself. "With each cycle, the losses lessened until they reached a steady value a lot closer to what we'd predicted," he said.

"We think we understand what's happening, at least qualitatively," Minervini continued. "It has to do with interactions between the thousands of wires twisted into cables that in turn are coiled to form the magnet. We are essentially changing the electrical characteristics of the cable in a way that decreases losses over time."

The team also explored the magnet's limits for three key parameters related to maintaining superconductivity: magnetic field, temperature and current density. "We don't want to run at the limits of these," Minervini said. "Rather, we want to run within margins that give us some leeway."

The tests, however, showed that these margins are harder to define than expected. "This is a cost issue," Minervini said. "If you know exactly where the margins are, you don't have to build in as much leeway, which is expensive."

In addition to the first tests in 2000, the team also ran tests in 2001 of a Russian insert and, earlier this year, of a second Japanese insert made of a different kind of superconducting wire.

"We still have a lot of data to analyze for all three test runs, but we've shown that the whole thing actually works," Minervini concluded.

Some 20 researchers from the Plasma Science and Fusion Center have been involved in the work. Fabrication of the U.S. portion of the magnet was funded by the Department of Energy, primarily through a multiyear grant to MIT. Other U.S. industrial tasks were performed by more than 20 vendors.