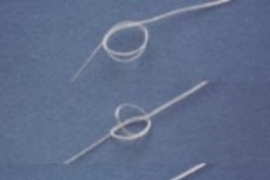 ↓ Download Image
Caption: Photo above (Copyright Science magazine) shows how a fiber of the new biodegradable plastic with "memory" can be used to tie a smart suture. After forming a loose knot, the ends of the suture were fixed. The series shows from top to bottom how the knot tightened in 20 seconds when heated to 40 degrees C.
Credits: Image courtesy / Science magaizine 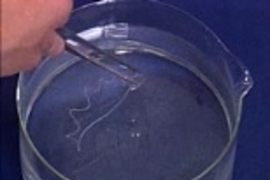 ↓ Download Image
Caption: This is an elongated fiber of the new biodegradable plastic with "memory" creating a permanent corkscrew form, such as those used in medical stents, when heated to a certain temperature.
Credits: Image courtesy / Langer Research Laboratory 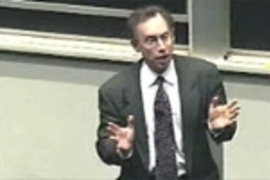 Caption:
Photo above (Copyright Science magazine) shows how a fiber of the new biodegradable plastic with "memory" can be used to tie a smart suture. After forming a loose knot, the ends of the suture were fixed. The series shows from top to bottom how the knot tightened in 20 seconds when heated to 40 degrees C.
Credits:
Image courtesy / Science magaizine

Caption:
This is an elongated fiber of the new biodegradable plastic with "memory" creating a permanent corkscrew form, such as those used in medical stents, when heated to a certain temperature.
Credits:
Image courtesy / Langer Research Laboratory

CAMBRIDGE, Mass. -- A smart suture that ties itself into the perfect knot kicks off the first of many potential medical applications for new biodegradable plastics with "shape memory" developed at MIT and the University of Technology, Aachen, Germany. The materials are also biocompatible, or safe for use in a living animal.

The new plastics, reported in the April 25 online edition of Science, could first be shaped as a string, for example, then when heated could "change into a sheet (to prevent adhesion between two internal tissues after an operation), a screw (for, say, holding bones together), a stent or a suture," said Robert Langer , MIT's Germeshausen Professor of Chemical and Biomedical Engineering. "I think there could be many different applications."

Langer coauthored the paper with Andreas Lendlein, a former MIT visiting scientist now managing director of mNemoscience GmbH, a company formed to commercialize the discovery. Lendlein is also a researcher at the University of Technology, Aachen, Germany, and just accepted a position as full professor at the University of Potsdam and as director of the GKSS research center in Teltow.

It is now possible to place small devices into the body by threading them through the tiny hollow tubes associated with minimally invasive surgery. "Such advances create new opportunities but also new challenges," write Lendlein and Langer. For example, "how does one implant a bulky device or knot a suture in a confined space?"

Some materials can be "taught" to have one shape at one temperature (or under one stress) and another shape at a second temperature. Much work, for example, has focused on "shape-memory" metallic alloys, which are used in applications such as stents for keeping blood vessels open. Shape-memory polymers have also been studied, but none have resulted in medical applications. "No shape-memory materials have been biodegradable," Langer said.

To create their new material, the two designed a biodegradable multiblockcopolymer, in which block-building segments are linked together in linear chains. Specifically, the polymer they created contains a hard segment and a "switching" segment, both with different thermal properties. One segment melts, or makes another kind of transition, at a higher temperature than the other.

By manipulating the temperature and stress applied to the overall material, Langer and Leindlin end up with a material that forms a temporary shape at one temperature, and a permanent shape at a higher temperature. They demonstrated this by creating the first "smart" degradable suture.

"We created a temporary shape in the form of an elongated fiber, which was then used to loosely tie a suture to close a wound on a rat," Langer said. After increasing the temperature, the suture material shrunk, creating a knot with just the right amount of tension on the surrounding tissue.

Lendlein and Langer note that it is difficult to create such a knot in the confined spaces associated with endoscopic surgery. "When the knot is fixed with a force that is too strong, necrosis of the surrounding tissue can occur. If the force is too weak, the formation of scar tissue which has poorer mechanical properties is observed, and may lead to the formation of hernias." Their shape-memory polymers appear to be one solution to the problem.

The researchers have also demonstrated another potential application of the new polymers: getting a long fiber of material to change into the corkscrew shape typical of a stent. Movies showing both the suture and corkscrew demonstrations are available.

This work was supported in part by a Bundesministerium Bildung und Forschung (BMBF) BioFuture Award and Fonds der Chemischen Industrie.