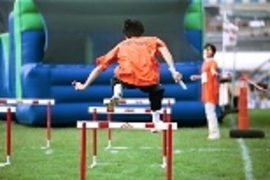 ↓ Download Image
Caption: A member of the Magic Dragons carries the baton over the hurdles to his waiting teammate.
Credits: Photo / Laura Wulf 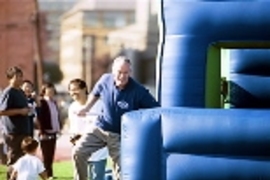 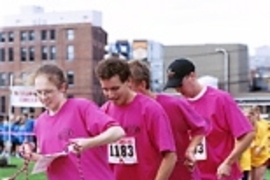 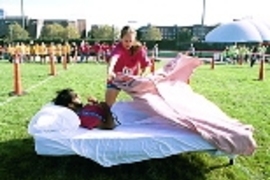 ↓ Download Image
Caption: In "Bedlam," Caitlin Bever tucks in fellow grad student Vikas Anant to prepare him for getting carried, bed and all, back to the finish line by his New-Tang Clan teammates.
Credits: Photo / Laura Wulf 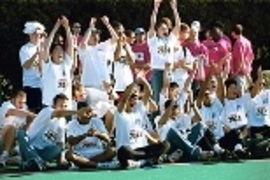 Caption:
A member of the Magic Dragons carries the baton over the hurdles to his waiting teammate.
Credits:
Photo / Laura Wulf

Caption:
In "Bedlam," Caitlin Bever tucks in fellow grad student Vikas Anant to prepare him for getting carried, bed and all, back to the finish line by his New-Tang Clan teammates.
Credits:
Photo / Laura Wulf

It was a bright and sunny day made even brighter by the 1,000-plus flashy T-shirts swarming Steinbrenner Stadium and the Jack Barry Field at Saturday's Johnson Games.

Fuschia was apparently the hue to do, as the hot-pink "Pacific Vice" team was named the first-place winner, or MIT Idols in Johnson Games parlance. The team, consisting of residents of the new Sidney-Pacific Street dormitory and staff members from areas reporting to the executive vice president, managed to outplay and outwit 31 other teams in a set of silly competitions that required skill, stamina and good humor.

"Without knowing even roughly how the scoring is done, we don't know how we won," said Deziek, an organization development consultant with Human Resources. "Near the end of the day, we bribed the judges with candy and ran a victory lap around the track, even though we didn't think we were close to winning. Then we conspired with our divisional cheer champs, the Anarchists, and others to help them win the overall cheer competition (which got us extra points, too). We never stopped doing these crazy things, like some tribe in a trance."

The Pacific Vice team comprised 13 men and 21 women: eight students (undergraduates and graduates), 14 staff and family members, one faculty member and one alumnus.

This year the games were held in honor of the opening of the new graduate residence at 70 Pacific St., known to the residents as Sidney-Pacific. A short dedication ceremony was held in a parking lot in front of the residence in conjunction with the opening ceremony of the Johnson Games.

At the opening ceremony, President Charles Vest introduced President Emeritus Howard Johnson, for whom the games are named, referring to him as "a great advocate of the role of sports and fitness activities at MIT."

Johnson set the tone of the day's work: "We are here to do that thing that we do so seldom here at MIT--have a great deal of fun," he said.

As the Olympic March blasted over the loudspeakers, the teams marched in color-coded battalions from the parking lot toward the fields. Half walked up Albany Street and half up Sidney. When they merged on Massachusetts Avenue, they were accompanied by the New Liberty Jazz Band, with Professor Emeritus Jay Keyser on trombone, playing Dixieland jazz from the back of a 1941 Ford fire engine.

The parade turned right onto Vassar Street and headed into Steinbrenner Stadium. Once there, the battalions broke ranks and it looked as if chaos reigned. But no--there was method in the madness. Each team proceeded to the site of its first event and the crazy competition began.

Contests like "Send in the Clowns" and "Bedlam" required teams to race down a course player-by-player to accomplish by relay something they'd never attempt alone, such as dressing up like a clown and running in uniform.

"Bedlam" contestants had to place a sheet, blanket, pillow and nightshirt on a twin-size bed at the end of the course. The fourth player had to don a nightshirt and get in bed, while the fifth tucked in the covers around him or her. Four to six running, sweating, yelling teammates then grabbed the bed, lifted it into the air and ran with it back down the course.

Allison Adler, a graduate student in linguisitics and member of the second-place team, the DeTerminators (winning the Sidney Silver in this year's games), discussed the team's strategy for this particular event.

"We tried to find someone who had military training," she said. But alas, they ended up with Adler herself making the bed.

"I just had a departmental party at my house and I had to make my bed. So I've had a little bit of experience already this weekend," she said about her speedy bed-making effort.

Her teammate Valentine Hacquard, also a graduate student in linguisitics, had to lie in the bed.

"It was scary when I saw four guys running at me," said Hacquard, describing the role of sleeper, easily one of the most heroic of this year's games.

In addition to courage and athletic skill, the games tested knowledge of art history ("Who painted this painting?" "This is a self-portrait of what artist?")--and trivia ("What was the first hypertext browser?") One student was overheard saying, "This is MIT and nobody knows this?" In response, his friend said: "What's a hypertext browser?"

Three hours later, over dinner in the Johnson Athletics Center, the winners were announced. Third-place winners, capturing the Pacific Bronze, were the Sims, residents of Simmons Hall, the new undergraduate dormitory.

Christina Silcox, a graduate student in health sciences and technology from the Pacific Vice team, and Alan Asbeck, a senior in physics who was captain of the Warriors, were presented with individual awards, called Vest's Bests, for their excitement and team spirit. The best one-minute team cheer was written by They Might Be Tools II, a team from the Women's Independent Living Group. One verse from the military-style chant went like this: "We're from WILG and we are strong! We've been winning all day long!"

For more information on the winning teams, click here.

This was the fourth time the games have been held; they last occurred in 2000. The Institute hopes to hold the games at least once every four years so most students get to participate while at MIT.

"The games turned out great," said organizer Ted Johnson, associate director of the Information Center and director of community services. "Truly it was a great event to honor Sidney-Pacific."