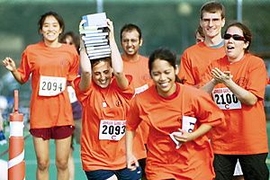 ↓ Download Image
Caption: Johnson Games competitors take a shot at "The Balancing Act" on Saturday. Participants loaded books one-by-one onto their heads, ran a short distance and then passed them to the next member of their team.
Credits: Photo / Laura Wulf

Caption:
Johnson Games competitors take a shot at "The Balancing Act" on Saturday. Participants loaded books one-by-one onto their heads, ran a short distance and then passed them to the next member of their team.
Credits:
Photo / Laura Wulf

The bright and sunny day was brightened by the 1,000 plus flashy T-shirts swarming Steinbrenner Stadium and Jack Barry Field at Saturday's Johnson Games.

Fuschia was apparently the hue to do, as the hot pink-clad "Pacific Vice" team was named the first-place winner, or MIT Idols, in Johnson Games parlance. The team, consisting of residents of the new Sidney-Pacific Street dormitory and staff members from areas reporting to the executive vice president, managed to outplay and outwit 31 other teams in a set of silly competitions that required skill, stamina and good humor.

This year the games were held in honor of the opening of the new graduate residence at 70 Pacific St., known to the residents as Sidney-Pacific. A short dedication ceremony was held in a parking lot in front of the residence in conjunction with the opening ceremony of the Johnson Games.

At that ceremony, President Charles M. Vest introduced President Emeritus Howard Johnson, for whom the games are named, referring to him as "a great advocate of the role of sports and fitness activities at MIT."

Johnson set the tone of the day's work: "We are here to do that thing that we do so seldom here at MIT--have a great deal of fun," he said.

As the Olympic March blasted over the loudspeakers, the teams marched in color-coded battalions from the parking lot and toward the fields. Half walked up Albany Street, half up Sidney. They merged on Massachusetts Avenue, where they were accompanied by The New Liberty Jazz Band, with Professor Jay Keyser on trombone, playing Dixieland jazz from the back of a 1941 Ford fire engine.

The parade turned right onto Vassar Street and headed into Steinbrenner Stadium. Once there, the battalions broke ranks and it looked to the observer as if chaos reigned. But no. There was method in the madness. Each team proceeded to the site of its first event and the crazy competition began.

Three hours later, over dinner in Johnson Center, the winners were announced. Coming in second place (winning the Sidney Silver), were the DeTerminators, from the Department of Linguistics and Philosophy. Third-place winners (capturing the Pacific Bronze) were The Sims, residents of the new undergraduate dormitory, Simmons Hall.

The best one-minute team cheer was written by They Might Be Tools II, a team from WILG, the Women's Independent Living Group.

"The games turned out great," said organizer Ted Johnson, associate director of the Information Center and director of community services. "Truly it was a great event to honor Sidney-Pacific."