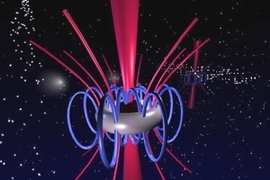 ↓ Download Image
Caption: An artist's impression of the hottest tango in the universe. The remnants of a star, now really a donut-shaped ring or torus, spin around a rotating black hole in a sort of cosmic tango. The black hole leads its passive torus-partner around, feeding it energy through the many magnetic field lines entangling the two cosmic bodies like entwined arms. The torus in turn radiates away that energy as unseen gravitational waves. At the same time, jets of energy are released along the black hole's axis of rotation. These jets later become the gamma-ray bursts sometimes detected by satellites.
Credits: Image / Pascal van Putten

Caption:
An artist's impression of the hottest tango in the universe. The remnants of a star, now really a donut-shaped ring or torus, spin around a rotating black hole in a sort of cosmic tango. The black hole leads its passive torus-partner around, feeding it energy through the many magnetic field lines entangling the two cosmic bodies like entwined arms. The torus in turn radiates away that energy as unseen gravitational waves. At the same time, jets of energy are released along the black hole's axis of rotation. These jets later become the gamma-ray bursts sometimes detected by satellites.
Credits:
Image / Pascal van Putten

CAMBRIDGE, Mass.--Gamma-ray bursts, extremely powerful explosions occurring in distant parts of the universe, may be the energetic offspring of a cosmic dance between black holes and their dance-partner stars, said scientists from the Massachusetts Institute of Technology and Tel Aviv University in the Feb. 21 issue of Science. But they show that the bursts are only a small portion of the total energy released during this cosmic tango.

During this dance, the torus operates much like a passive partner, receiving enormous amounts of energy from the black hole and radiating that energy out in all directions through the magnetic field lines entangling the two cosmic bodies like entwined arms.

In their paper, the scientists present a model for the energy released during this dance. The model describes how the energy later detected as gamma-ray bursts is actually released in beamed jets along the black hole's rotational axis, while the majority of the black hole's energy, about 100 times more, radiates out from the torus as gravitational waves.

The model solves a paradox involving recent observational evidence that gamma-ray bursts are focused beams of moderate energy. But the rotating black holes (known as Kerr black holes), which are considered a possible source of gamma-ray bursts, release large amounts of energy omnidirectionally, the scientists assert in their paper. They have accounted for both phenomena in the model.

"Of all astrophysical transient events, cosmological gamma-ray bursts are potentially the most prominent laboratory for studying Kerr black holes," said Maurice van Putten, assistant professor of mathematics at MIT and lead author of the paper.

"The observed time-variability shows that the source of these gamma-ray bursts is very compact, perhaps 10 to 30 kilometers in diameter, yet highly energetic," said van Putten. "All else equal, a Kerr black hole, which spins so fast that one-third of its mass is stored in rotational energy, is considered by many a strong contender."

According to the inferences of Einstein's theory of general relativity, Kerr black holes have no detailed texture on their surface. Van Putten believes that, if active, Kerr black holes would be luminous in all directions. While their powerful "dark" emissions of gravitational waves have not been picked up yet by the detection equipment presently in use, they could be detected in the next decade using LIGO, the Laser Interferometer Gravitational-wave Observatory, a new observatory that went into operation about two years ago.

The torus, which is being pulled around by the black hole's exceedingly strong gravitational grasp, rotates around the black hole for about 20 seconds before being consumed. During that time, jets of energy are emitted along the black hole's axis of rotation when the black hole reaches a rotational speed of more than twice that of the torus. These jets burst into a firework of gamma rays as they dissipate their kinetic energy some 10 billion miles away from the black hole. The bursts were discovered serendipitously by American and Russian satellites some three decades ago.

Because 20 seconds is a long time for a torus to survive, the scientists assert that it must be accepting energy from the black hole and passing it along as gravitational waves radiating out in all directions. If the torus rotated without receiving energy from the black hole, it would be sucked into the hole. If it received all that energy without passing it into the atmosphere, it would blow apart.

"How can a torus around a black hole as small as 20 kilometers survive for such a long time? We propose that in some 10,000 orbits around the black hole, the torus forms an efficient catalytic converter of black hole spin energy before its final destruction," said van Putten.

If the proposed model is correct, the gravitational waves emitted from around the torus of the Kerr black hole will be detected eventually by LIGO. This could lead to identification of the first known Kerr black hole, an object which was found as an exact solution to the Einstein equations in 1963 by Roy P. Kerr, but whose existence as a cosmic body has not been proved yet by observation.

In 2000, LIGO was inaugurated in Livingston, La. with a twin facility in Hanford, Wash. The project is a joint effort of the California Institute of Technology, MIT and about 20 other institutions represented in the LIGO Scientific Collaboration supported by the National Science Foundation.

The facility represents years of effort on the parts of MIT Professor of Physics Emeritus Rainer Weiss and many other scientists. David Shoemaker, of MIT's Center for Space Research, now directs the MIT LIGO Laboratory. A similar facility, VIRGO, jointly owned by France and Italy, was recently inaugurated in Pisa, Italy.

"Association of gravitational-wave bursts with the radio afterglows that should appear several months after the explosion may provide additional tests for this model, and may help in analyzing future LIGO data," said Amir Levinson of the School of Physics and Astronomy at Tel Aviv University, second author of the paper.

Other collaborators on the research are Eve C. Ostriker of the University of Maryland, Hyun-Kyu Lee of Hanyang University in Korea and Abhinanda Sarkar of GE, India. Van Putten's research is funded by NASA, MIT's C.E. Reed Fund and NATO.

"Making predictions of what LIGO will find is like walking into a dark room. Before you turn on the light, you don't know exactly what you'll see, but you have some good ideas of what will be there," said van Putten. "In 2008 it will get serious. We will see what's really in the room. Right now, we're trying to guess which source is out there and which will be the best candidate for study."