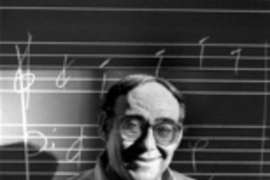 Edward Cohen, composer, performer and senior lecturer in music at MIT, died at his home in Belmont Saturday, April 27 after a long illness. He was 61.

Cohen was a classically trained musician inspired by jazz and devoted to new music. His compositions include pieces for solo instruments, chamber ensembles and orchestra, as well as two operas. One of these, "The Bridal Night," his last major work, was premiered this past January by the Collage New Music Ensemble in Boston.

"He was a great musician and a wonderful teacher," said Professor of Music Ellen Harris, director of the music and theater arts section at MIT.

"Eddie was a deeply serious musician, uncompromising in his artistic standards. He was modest to a fault, yet he knew his worth and demanded as much of others as he did of himself," said David Deveau, senior lecturer in music.

A 60th birthday concert celebrating Cohen's career as a composer was held last year at MIT. Following it, Cohen, who had had an electric piano brought to his hospital room while he underwent cancer treatments, modestly described his life in music: "In the mornings I compose at home, and in the afternoons I come into MIT and teach," he said.

The MIT concert, held in Killian Hall, drew colleagues from MIT and Brandeis, along with students, area musicians and critics. Cohen, depleted by illness, attended in a wheelchair.

"He was clearly satisfied, and I'll never forget his smile after that concert," said Deveau.

The critics did more than smile.

"Forgive the stereotype, but university professors aren't supposed to compose music like this. The piano quartet was a continuation of Shostakovich's music; the piano sonata, a big-scaled vigorous enterprise," Richard Buell, music critic, wrote in his review of the Cohen concert for The Boston Globe.

"What kind of 'voice' is this music? A surprisingly lyric, long-spanned one, striking, obviously 'modern.' And all of it built like a steel trap. Gripping music, beautiful performances, a wonderful concert," Buell wrote.

Bogdan Fedeles, writing for The Tech, described Cohen as a "living master" of chamber music that is "fascinating in its complex polyphonic sonority."

Cohen began teaching at MIT in 1977. Colleagues and students alike pointed to Cohen's generosity of spirit and seriousness of purpose in their memories of working and studying with him.

"He was my lifelong teacher. His steadfast devotion to truth and honesty in his music and in his personal relations were always an example to me. Most of my most cherished musical ideas around which I continue to grow as a musician stemmed from discussions with Ed," Child said.

His students recalled a man of high expectations and low tolerance for distraction or discouragement.

Dawn Perlner (S.B. 2001) studied composition with Cohen and recalled his teaching style as both exacting and enthusiastic.

"I'll never forget the time Professor Cohen was explaining how to compose a sonata form and someone jokingly challenged him to write one for us on the spot. He improvised it at the piano--it was beautiful and in perfect form."

"I flunked one exam, yet he did not tell me to drop the class. Instead he told me to go over the exam and re-do all the questions, which I did. He knew how to make students feel talented and in need of improvement at the same time, the perfect balance to get us to learn to be the best musicians possible," said Perlner.

Ed Kohler (S.B. 1995, S.M., Ph.D.) said, "He was patient and kind. He never skimped on feedback. He treated every piece of work we produced as worthy of respect. And he wrote all his comments in complete sentences."

Kohler also recalled a moment one Valentine's Day, when the Logarhythms interrupted one of Cohen's classes to serenade a female student. Cohen resisted, then allowed the a cappella group to sing.

"About a minute in, Professor Cohen put his hands on the piano and joined them, slipping in without a break. His version was all chords, jazzier, hugely harmonized, perfectly in time and in tune. They finished together with a huge crescendo. We clapped like crazy. I was overwhelmed with joy. The Logs left, and Professor Cohen said, 'Very simple harmony. Too bad.' Then he went on with class," Kohler said.

A LIFE IN MUSIC

Born in New York City in 1940, Cohen played piano and trumpet and attended the High School of Music and Art in Manhattan. While writing music in a classical vein, he was inspired by jazz and improvisation. As a teenager he worked as a jazz pianist at resorts in the Catskills, and he retained an avid interest in jazz throughout his life. He frequently entertained family and friends with sparkling and original renditions of jazz standards.

Cohen's summer jobs in the Catskills may have nourished an avocation, too. He became an avid pool player and liked to take breaks from composing by shooting pool on a table he kept in his basement, his wife, Marjorie Merryman, said.

Cohen's formal musical training was entirely classical. He received the B.A. with honors in music from Brandeis University in 1961 and the M.A. in 1965 from the University of California at Berkeley, where he won the Ladd Prix de Paris, which sponsored two years of composing in Paris.

Before coming to MIT, Cohen taught at Brandeis University for 13 years. He also taught at Harvard.

Although he was strongly focused on the creation of new music, Cohen found time for other pursuits. He spoke French fluently and had a lifelong interest in French literature and film. He was a determined distance runner who ran the Boston Marathon four times in the 1970s.

Cohen is survived by his wife; two daughters, Sarah of Somerville, and Jane of Belmont; his parents, Lawrence and Naomi Cohen of Westport, Conn.; two brothers, Jonathan of Chicago, and Frederick of New York City; and eight nieces and nephews.

A memorial service is planned for October 20 from 3 to 5 p.m. in Wong Auditorium and MIT is establishing the Edward Cohen Fund for New Music. Contributions may be sent to MIT, Music and Theater Arts, Cambridge, MA 02139.

A version of this article appeared in MIT Tech Talk on May 8, 2002.