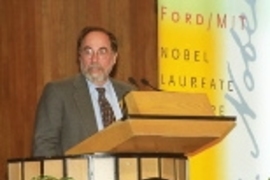 Trust should be as simple as "the Golden Rule--you trust me and I'll trust you--but it seems to be falling out of fashion," said David Baltimore, president of the California Institute of Technology, in a talk on "Building a Community on Trust" held in Kresge Auditorium Tuesday night.

The world is relying increasingly on "surveillance equipment rather than trust. We've put our trust in methods of control, not in people." But this mechanical equipment cannot "ensure moral behavior," said Baltimore, a former MIT Institute Professor and the founding director of the Whitehead Institute for Biomedical Research who became president of Caltech in 1997.

He won the Nobel Prize in Medicine or Physiology in 1975 for his work in virology. The talk was the fourth in the Ford/MIT Nobel Laureate Lecture series, a five-year program sponsored by the Ford Motor Company.

In his talk, which ranged in scope from current events to past personal experiences, Baltimore described how two events that occurred during his time at MIT turned on trust: the establishment of the Whitehead Institute and the scientific misconduct case against Thereza Imanishi-Kari, a Tufts professor who had previously been at MIT.

When Jack Whitehead wanted to establish the Whitehead Institute at MIT, he was greeted "with suspicion by the MIT community," who feared Whitehead might try to steal their intellectual capital. But Baltimore, already selected by Whitehead to direct the new research facility, insisted that MIT was the right setting. An affiliation agreement was crafted, but "really there had to be trust," said Baltimore. Finally, "the argument that carried the day was that MIT was built on taking chances."

The need for trust lay at the heart of the Thereza Imanishi-Kari case. "Trust is necessary to carry out collaborative scientific research," said Baltimore, who did not discuss the case beyond his description of the need for trust.

During the case, Baltimore defended Imanishi-Kari, his co-author of a 1986 article in the journal Cell, during a decade-long investigation in which she was accused by a postdoctoral fellow of falsifying research notes. The accusations led to an investigation by the National Institute of Health's fraud unit which determined Imanishi-Kari had falsified records.

On appeal, Imanishi-Kari was exonerated.

While never accused of wrongdoing himself, Baltimore's defense of Imanishi-Kari created problems for him, including his resignation under pressure as president of Rockefeller University in 1994. He was invited back to MIT during that time and remained until his appointment as president of Caltech.

"That she was vindicated showed that my trust in her was well-placed," said Baltimore. "In science, we assume that a colleague is trustworthy and only in extreme do we doubt it."

In academia, trust is necessary between teachers and students, he said, describing Caltech's honor system. Examinations at the school are take-home, some open-book, others closed. Faculty may set time limits; students are expected to comply. "I suppose there is a little cheating, but basically the system works," he said.

He touched on the Enron scandal ("It shows how completely investment is controlled by trust") and the ImClone failure ("the darling of the biotech world...but management was dishonest") and said that even large collaborative science projects require trust.

"Millions of people's work may be involved in building a satellite. Do they trust one another? Yes. But they have engineering tests also. At that level of expertise, trust is not enough. You have to be sure because of the catastrophic effects of inadvertent error," said Baltimore.

Scientists can now use MRI to determine what part of the brain is active in decision making, Baltimore said, which may ultimately be used to disprove the "selfish gene, a controlling notion in biology." Because of the so-called selfish gene, humans always act to favor their own genes, causing altruism toward one's own family, for instance, and not toward another family.

Baltimore described an economist's research in which individuals in 15 different cultures were given $10 each and told to share a portion of the money with one other person--with the caveat that if the second recipient were unhappy with the first recipient's offer, neither would get a dime. Results showed that the more capitalistic the society, the more generous the shared portion. Baltimore hoped this showed we had developed a "sense of fairness or altruism."

"This is the serious encroachment of scientific theory into areas where it previously did not apply," said Baltimore, who seemed delighted at the overlap between neuroscience and philosophy, economics and ethics.

He closed his talk by voicing the hope that the "study of trust" might be next on the horizon.