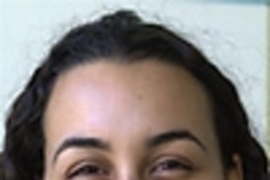 When Nicole Vlado came to MIT as a freshman in 1998 from New York, she assumed that her creativity would flourish at the Institute in what she then called "art" - music, writing and visual arts - as she worked towards her S.B. in architecture.

Now the newly appointed program coordinator for special programs in the Office of the Arts looks back in wonder at what four years in the techno capital have wrought.

"I was unaware of the huge effect knowledge, technology and MIT culture would have on my personal and artistic growth," said Vlado (S.B. 2002 in architecture), whose plugged-in undergraduate activities included work as a hip-hop DJ and her own radio show, Lyrical Manifestations on WMBR.

Growing up in New York gave her the capacity to appreciate and transform her MIT experience into innovative written and visual works, she said.

"While MIT is very different than Manhattan, the intensity of MIT can be likened to the energy of the city," Vlado said. "As a teenager and as part of a diverse, underground hip-hop subculture, I learned the importance of expression," she said.

MIT challenged Vlado's expressiveness through poetry workshops with Erica Funkhouser, and work with visiting artist, Christine Tarkowski, whose Hi + Lo Printmaking class inspired much of her own work, Vlado said.

"Also, through cross-registering at the Mass. College of Art, I had an amazing opportunity to enter a different cultural/academic setting, and learn from the teachers and students, both," Vlado said.

"Now I've grown comfortable here while being continually challenged and inspired. I'm excited to remain at MIT for a little longer. Joining the Office of the Arts will help me continue to grow, and I'm very fortunate to have this opportunity."

Michele Oshima, director of special programs in the Office of the Arts, announced Vlado's appointment, which was effective Sept. 1.

"Nicole brings a breadth of experience in the arts at MIT. She's an ideal person to encourage collaboration and creativity between undergraduates, graduate students, faculty, staff and visiting artists," said Oshima.

Vlado will divide her time between the artists-in-residence program and student initiatives, including the Freshman Arts Seminar Advising Program, Council Scholars in the Arts and the List Foundation Fellowship for Students of Color.

Her work in the arts focuses on "identity politics, an important topic at a diverse university such as MIT. I do writing, printmaking and collage, creating works that react to thought and experience," she said.

Vlado has already received recognition for her work in various media. Her grants and awards include the Faculty Design Award for Excellence in Studio Design, a Committee on Campus Race Relations grant for her work titled "constructing history," a Council for the Arts Director's Grant for "constructing history," a 2002 Schnitzer Student Art Award honorable mention; and an Ilona Karmel Writing Prize second-place award for "nyc ghosts" in 2001. Vlado was a member of the 2001-02 MIT Slam Poetry team and received Office of Minority Education Academic Honors from 1999-2002.