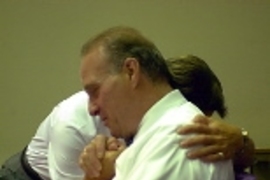 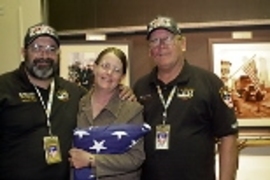 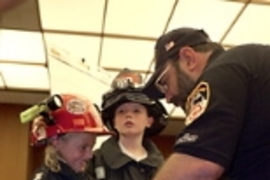 Caption:
World Trade Center Task Force Fire Safety Director Mike Bellone helps Jamie Joyce, 8, into one of the jackets he and his fellow workers wore in their rescue efforts at the World Trade Center. Jamie's brother Patrick, 10, stands nearby, outfitted in a similar jacket and hat. The children's great-grandfather was a Somerville firefighter. Their great-aunt Kathy Doyle works at Sloan School.
Credits:
Photo / Donna Coveney

"I feel very honored," said Willman, the faculty liasion for Academic Media Production Services who organized the volunteers. "And I'm still caught off guard by the whole thing."

Firefighters Mike Bellone and Bob Barrett, who worked 257 consecutive days recovering bodies and body parts from the debris, presented the flag to Willman at the end of a four-hour event Sunday in which they shared their experiences of the tragedy with the audience in Room 10-250.

"Without you, we couldn't do our jobs," Bellone told the volunteers.

They also made a gift to the MIT Chapel of a cross cut from an I-beam that had fallen on a firefighter in the World Trade Center. Iron workers regularly cut crosses from beams removed from firefighters' bodies.

Many of the city's firefighters rushed to the scene when the first plane hit the north tower of the World Trade Center on Sept. 11. When the south tower collapsed just before 11 a.m., New York lost those firefighters, along with 126 fire trucks and all the tools. A video introduced by David Ferrante, an electrician at MIT, and his wife Pam, showed a line of firefighters heading into the cloud of dust. "I didn't realize they'd never come out," said the videographer on the tape.

"We lost all the chiefs," said Bellone. "So we were left to figure out how to run the show ourselves." Both his parents died during the cleanup period and he didn't see his children for nine months. He worked side by side with Barrett to recover as many of their brothers as they could.

"We talked to the parts. That's how we kept our sanity," said Barrett. "If we had a name, we'd say 'John, we're taking you home now.'" The two estimate that together they found about 400 bodies, but said they stopped counting early on. Of the 343 firefighters killed in the attack, the remains of 189 were recovered.

"Why did we work 257 days straight? If we missed two days, the site would change. The exit ramp that was over here might be over there. So it was a lot easier to be there every day," said Bellone. "Plus our intuition was good. We knew where to find bodies."

"The dogs were trained to sniff out bodies. They weren't trained to recognize heat. So when they hopped on a smoldering I-beam [some of which were hot enough to melt the firefighters' rubber-soled boots] they'd get hurt. Some of them even ignited," said Bellone, who added that the firefighters were often slowed down because they stopped to care for their four-footed comrades, many of which could not be saved.

"We retired a lot of them because of burns or just stress," he said. The Federal Emergency Management Agency team assembled at the site included scores of veterinarians.

"What you guys did requires a dedication, a commitment, something far beyond a Ph.D.," said one woman at Sunday's event, attempting to express the gratitude and awe felt by other audience members.

"We think God put us there for that," said Bellone, a large man who joked that he had grown four sizes during the nine months because of volunteers' insistence that workers eat candy bars and drink Jolt cola to maintain their stamina.

At Sunday's event, New York City sanitation worker Andrew Macchio sang "America the Beautiful" a cappella through his tears, just as he did at Ground Zero on Sundays. His job during the recovery effort was to drive a water truck through the debris to hose down the clouds of dust at Ground Zero. He wept as he described the importance of the volunteers at St. Paul's. "More than anything else, it was the kindness there that kept people going," he said, refusing to shake hands with an audience member. "This is what we did there," he said, hugging her instead.

Children who attended the MIT event were encouraged to hold tools like those used in the recovery effort and don the firefighters' helmets and jackets, which still carried the smell of smoke. Smiling, their eyes round with excitement, they posed for photos with Bellone and Barrett, who wore dark blue pants and T-shirts with "WTC Task Force Recovery Team" logos.

"The smell of his jacket brings it all back to me," said Sister Grace of the Society of St. Margaret, an Episcopalian order based in Roxbury with a house in New York three blocks from St. Paul's. Sister Grace spent nine months as the pastoral coordinator at St. Paul's, where recovery workers ate, slept and sought refuge.

"I still miss it," she said, joking that her main job was to wake up Bellone each morning from the pew where he slept a couple of hours each night ("front pew on the left," she said). Firefighters were assigned 12-hour shifts but often worked 18 to 20 hours at a time.

"I started crying [Saturday] when these guys showed up," Sister Grace said.

The recovery workers were in Boston for the weekend, visiting local firehouses and pediatric wards at Massachusetts General Hospital and the Shriners Burn Center. They visited the firefighters at Ladder 24 on Massachusetts Ave., presenting them with another flag from Ground Zero.

Willman said the trip was just as important for Bellone, Barrett and Macchio as it was for the 120 MIT volunteers, who took buses to the site to work 12-hour shifts at St. Paul's, serving food, dispensing hugs and listening. Alumnus and physician Jay Schnitzer, who made a short presentation on Sunday, volunteered as part of the Federal Emergency Management Agency's medical team.

"It became like a family," said Willman. The volunteers also raised money to purchase boots and socks for the recovery workers, who needed dry socks five to six times a day and new boots frequently because the soles melted.

"While it was happening, the recovery workers rarely talked about the things they were experiencing unless it was just a really intense day," said Willman, who was at St. Paul's on Easter week when recovery workers found the firefighters' command center in the debris of the south tower. "That's where they lost most of the firefighters and the chiefs.

"It was really hard for them after the closing in June. Mike told me, 'We're where you all were last fall. We were so busy working that we never had time to grieve for the people we lost until now,'" said Willman, who added, "But there's a very strong positive side to it. Seeing the response really restores your faith in the goodness of people."

"Together we can perform miracles," Barrett told the audience.