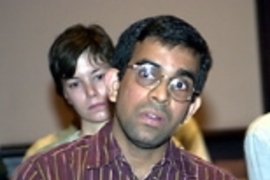 Innovations in foreign policy, nation-building and education as well as in science and technology are all urgently needed in the post-Sept. 11 world, according to panelists who participated in two separate discussions on Monday, Sept. 9.

But the spirit of innovation, so central to MIT, is menacingly absent from national leadership, according to MIT faculty and students who participated in an evening discussion, "Responses to Sept. 11: The U.S., Europe and the Middle East."

The Bush administration has failed to focus its strengths on Al Qaeda, to use humanitarian relief effectively, to coordinate intelligence and security agencies, and to face the threat of "loose nukes" in Russia, said Stephen Van Evera, professor of political science and associate director of the Center for International Studies, which organized the panel.

"The cause of these errors is a general failure to innovate. And this war, unlike World War II, calls for large innovation. Bush is doing more of what we did before Sept. 11. But we need less money for missile defense and more for smaller agencies. We need new tools to fight new threats," Van Evera declared.

Suzanne Berger, the Raphael Dorman and Helen Starbuck Professor of Political Science, added that Europeans are angered and alarmed over what they view as the unilateralism and protectionism of the Bush administration.

"If we want the U.S. to be safe in the world, we have to respect others' beliefs about capital punishment and the rights of prisoners. We have to enact the best of what it means to be an American - cooperation, collaboration and respect for various beliefs. We need our allies," Berger said.

Jeremy Pressman (Ph.D. 2002) described the delicacy of negotiations in and among nations in the Middle East and the U.S. role there.

"The U.S. is now fumbling a big opportunity to get involved in the Israeli-Palestinian situation. The regimes throughout the region want this to be over. They're looking for leadership," said Pressman.

"The materials for peace are finally there, if only Bush would spend political capital on it," Van Evera agreed.

Monday's earlier panel, "MIT's Responsibility in a Dangerous World," was organized by the Program in Science, Technology and Society (STS) and moderated by Rosalind H. Williams, the Metcalfe Professor of Writing and director of STS.

Canizares and Gast summarized two major MIT projects - one administrative and community-wide, the other involving research. Both demonstrated the leadership role MIT has consistently taken.

Canizares described the work of the Committee on the Protection of Human Life and Infrastructure, formed shortly after Sept. 11, 2001, by President Charles M. Vest. Canizares also announced the launch of a new web site, "Homeland and Global Security" (see story on page 6).

"MIT works hard in Washington with policymakers to maintain our welcome to international students," said Gast.

Foley and Shulman, both graduate resident tutors, presented results from a survey of undergraduate students on the effects of the terrorist attacks.

Student suggestions for MIT's future role in the post-Sept. 11 world focused on curricular changes - primarily on adding or requiring courses on the "roots of global discontent" or on moral and ethical implications of research, Shulman and Foley reported.

Robert P. Redwine, dean for undergraduate education and professor of physics, challenged the group to consider housing choices rather than course choices.

"We have a wonderfully diverse student body, but we will have a rather segregated student life as long as we stick with 'comfort zones' in housing," said Redwine. He suggested students consider the wider educational aspects of housing choice.

To be truly welcoming and truly American, commemorative events should include not just Old Glory but the flags of every country of victims of the Sept. 11 terrorist attacks, suggested STS graduate student Kaushik Sunder Rajan - a comment that produced a ripple of sympathetic applause across the room.