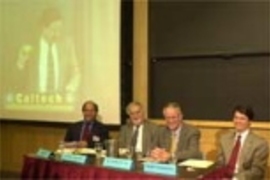 Four to six million votes, a number which is double the population of Chicago, were lost in the 2000 presidential election due to problems with ballots, equipment, registration or at the polling place, according to a joint analysis by experts at the California Institute of Technology and the Massachusetts Institute of Technology.

The report, sponsored by the Carnegie Corporation, is a non-partisan examination of the existing voting process, and the first comprehensive study of voting technology to be completed in the wake of the 2000 Presidential election.

In their introduction to the report, Caltech President David Baltimore and MIT President Charles M. Vest, note: "In the last election, Americans learned that at the heart of their democratic process, their 'can-do' spirit has 'make-do' technology as its central element. For many years, we have 'made do' with this deeply flawed system, but we now know how poorly these systems function. Until every effort has been made to insure that each vote will be counted, we will have legitimate concerns about embarking on another presidential election."

The team of 10 computer scientists, mechanical engineers and political scientists were appointed by the presidents of the nation's most prestigious scientific universities after the 2000 presidential election to evaluate the state of American voting systems. Their 100-page report, entitled "Voting: What Is, What Could Be," outlines the magnitude of problems with voting equipment, and offers a blueprint for fixing them before the next presidential election.

The report recommends two immediate reforms that could reduce lost votes by 50 percent in 2004: installing voting machines that scan paper ballots at the precinct and making voter registration data available at polling places.

Other key findings include:

The report also proposes a new modular voting architecture that could serve as a model for future voting technology, one that would offer greater opportunity for innovation in ballot design and security.

"The Voting Technology Project is part of a larger effort currently underway -- involving many dedicated election officials, researchers, and policy makers -- to restore confidence in our election system," commented Steve Ansolabehere, a professor of political science who headed up the MIT team. "We are hopeful that the report will become a valuable resource, and that it will help to bring about real change in the near future."