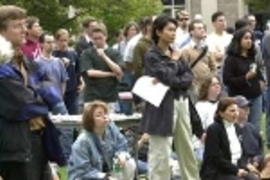 CAMBRIDGE, Mass. -- A peace rally organized by MIT undergraduate and graduate students on Thursday (Sept. 20) transformed McDermott Court into a postcard from the Vietnam era, complete with peace signs and poster-painted slogans, but with a contemporary message:

The anti-war movement is alive and well. But it has a new focus -- rather than stop the war, just don't start it.

MIT faculty and students addressed the crowd on behalf of nonviolence instead of military action by the US government in the wake of terrorist attacks on New York City, Washington and in Pennsylvania.

Both generations of speakers advocated relying on international laws and on the World Court for prosecution of terrorists.

While not justifying the actions of the terrorists who hijacked and crashed four passenger jets last week, faculty and student speakers said the United States was in part to blame for decades of misguided Mideast policies that have made people angry.

Hugh Gusterson, professor of anthropology and science and technology studies at MIT, urged Americans to "imagine the real suffering and grief of people in other countries. The best way to begin a war on terrorism might be to look in the mirror."

Ayida Mthembu, associate dean of counseling and support services at MIT, suggested that students look in the mirror, too, but for signs of youth and possibility.

"Think how fortunate you are as young people. You have the opportunity to have your voices heard. You are the best hope we have for changing the world. Be active," Mthembu said.

Mthembu also acknowledged the presence of people carrying 'Support America' signs at the periphery of the lunch-hour event, declaring, "We are all Americans."

Other speakers addressed the US and global relations.

Linguistics professor Wayne O'Neil, wearing a black cap with Veterans for Peace, Inc., printed on it, described himself as a "veteran of fifty years of activism" and noted, "What the US calls counter-terrorism is terrorism by another name. Operation Infinite Justice -- the Bush administration's code name for proposed military action against terrorists -- is 'cowboy law.' Through discussions like these, 'Operation Peaceful Justice' can be our code name."

Jean Jackson, professor of anthropology, also endorsed legal means for bringing to justice the "mass murderers" who attacked the US on September 11th.

"I am outraged by these terrible acts. But we have rules about declaring war, fighting war, ending war, and prisoners of war. To declare war, in this case, is a dangerous use of metaphoric language: it dignifies terrorist acts and implies a war with terrorists could end with a peace treaty. We must resist calls for revenge or retaliation," she said.

Balakrishnan Rajagopal, assistant professor of urban studies and planning, saw possibilities for reform in international laws. He pressed the point by invoking another terrorist disaster, the terrorist bombing and crash of Pan Am Flight 103 over Lockerbie, Scotland.

"International law provides the right, by very narrow means, to indict and to execute. We might compare our situation with Lockerbie. There have been recent international innovations in law in that case -- for example, Scottish judges sat in the Hague. This situation may provide us with an important opportunity to effectively pursue meaningful reforms," he said.

Alice S. Yao, a freshman at MIT and one of the organizers of the event, introduced fellow students who read aloud the goals of the gathering. Petitions calling for "examination of US foreign policy leading to terrorist opposition, active maintenance of civil liberties, and the use of rational international law rather than hate and haste in pursuing justice" were circulated at MIT as well as at rallies at Wesleyan (CT); University of Southern California, Hunter College, Vassar, Harvard, UC Berkeley, Cornell, Penn State, the University of Kansas, Middlebury, Columbia (NYC), Ohio Wesleyan and Oberlin College.

Groups on all 14 campuses signed the same petition, organizers said. In addition, students from MIT and Caltech formed their own coalition to oppose a military response to the attacks.

"We came together as students of the scientific community to help prevent the disaster that would be caused by hasty retaliation. The important thing now is preventing this tragedy from turning into something worse," said Zack Perez, a freshman at MIT.