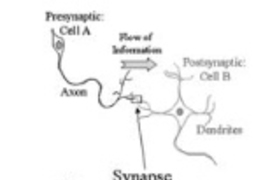 ↓ Download Image
Caption: This diagram illustrates a synapse in the central nervous system. Neurotransmitter molecules are released from presynaptic terminals along the axon of nerve Cell A, travel through the synaptic cleft and reach the postsynaptic terminal on Cell B's dendrite. If the transmitter released reaches a peak concentration quickly (within 1 millisecond) as in a mature release, receptors can detect the message and continue to pass along the information. However, if the transmitter is released slowly (in approximately 10 milliseconds), the message fails to be detected.
Credits: Image / John J. Renger

Caption:
This diagram illustrates a synapse in the central nervous system. Neurotransmitter molecules are released from presynaptic terminals along the axon of nerve Cell A, travel through the synaptic cleft and reach the postsynaptic terminal on Cell B's dendrite. If the transmitter released reaches a peak concentration quickly (within 1 millisecond) as in a mature release, receptors can detect the message and continue to pass along the information. However, if the transmitter is released slowly (in approximately 10 milliseconds), the message fails to be detected.
Credits:
Image / John J. Renger

CAMBRIDGE, Mass. -- Researchers at the Massachusetts Institute of Technology have discovered a mechanism in brain cells that could explain why very young brain cells seem to turn a deaf ear to one another.

The human brain has roughly 10 trillion nerve cells (neurons) that communicate with one another through synaptic connections. In the developing brains of very young mammals -- and probably humans, although scientists don't know that for certain -- these neuronal messages often fail to get through from one synapse to the next. As the brain matures, the synaptic connections also mature, becoming more functional and numerous, and the mammal develops cognitive skills.

Knowing how these synaptic connections become functional, or don't, could help scientists understand what to do when things go wrong, such as with developmental problems in children or degenerative brain diseases like Alzheimer's.

In a paper published in the February 22 issue of Neuron, Professor Guosong Liu and Dr. John J. Renger presented evidence about the functional mechanism involved in synaptic maturation, which plays a critical role in the establishment of effective synaptic connections in early brain development. A third author of the paper, former post-doctoral associate Christophe Egles, now works at Tufts University.

"This work uncovers a fundamental elemental mechanism that could effect any synaptic transmission in many species," said Professor Liu, who holds positions in the biology and the brain and cognitive science departments.

When synaptic connections are being made, the initial communication attempts may not be functional. Scientists refer to these as "silent" connections, because the message doesn't pass from one neuron to another. The generally held theory is that the receiving neuron lacks a receptor molecule, rendering it unable to detect the neurotransmitter chemical being released by the other nerve cell. Scientists assumed that sometime during the development of those synaptic connections, a receptor molecule would be incorporated into the synapse, allowing neuronal communication to occur.

But Drs. Liu and Renger discovered that this is not necessarily the case. They found that receptor molecules exist on the post-synaptic cell from early development. Their experimental evidence proves that the process of maturation lies within the speed at which the pre-synaptic neuron releases its chemical message. Sometimes the neurotransmitter is released slowly, in what they call a "quiet" message.

"What we found is that even if the receptor molecule is there, the cell doesn't detect the neurotransmitter because the speed of the release is too slow," said Dr. Renger, a postdoctoral associate in the Center for Learning and Memory. "People have always thought that neurotransmitter was released lightning-fast and all at once. We've proved that there's a slow form of release, too."

"We were surprised," said Professor Liu. "The classically held belief is that certain receptors are absent on the immature post-synaptic cell."

Their work was done in vitro on cells taken from the hippocampal portion of a rat's brain. (The hippocampus controls memory.) But the researchers believe that the mechanism is general enough that it would be the same for neurons from any part of the brain or larger central nervous system of any species. They also believe that the mechanism is consistent for both excitatory and inhibitory neurotransmitters.

Nerve cells can form many synapses at the terminals of their axons -- the branches extending out from the cell bodies that transmit information away from the neuron. Each of these synapses releases only one type of neurotransmitter, used in its connection with a synapse on a neighboring cell's dendrite -- similar, though larger branches that carry information toward the neuron cell body. Seventy percent of synapses within the brain are estimated to release excitatory neurotransmitters.

Drs. Liu and Renger are almost as excited by how they made their discovery as about what they found. They designed and built a new system that allowed them "to directly test the hypothesis of silent synapse maturation. All experiments done before were indirectly tested," said Professor Liu, who began work on the system about four years ago. Dr. Renger joined the project last year when he came to MIT as a Riken-MIT Fellow.

"Ours is the only system in the world that can test both the pre- and post-synaptic function of a single synapse simultaneously," said Professor Liu, who holds an MD as well as a PhD in neuroscience, but has a penchant for electrical engineering. ("Everything I do is high-tech because I'm so interested in electrical engineering," he said.)

The system uses the standard equipment of a confocal microscope and micromanipulators, but controls these with the help of a specialized computer program written by Drs. Liu and Renger.

"This is a major advance in using technology to solve a biology problem," said Professor Liu. "We wrote sophisticated computer software that allowed us to control the movement of the electrode over the synapses on a cell's surface, testing the effects of the speed of the neurotransmitter release. We were able to slow the neurotransmitter delivery at a single point or move it from point to point, scanning the surface of the dendritic tree and demonstrating that the silent transmission process can be mimicked at any excitatory synapse on the neurons."

In their experiments, which were funded by the National Institutes of Health and the Riken-MIT Neuroscience Center, they directly applied the excitatory neurotransmitter glutamate onto the post-synaptic surface of a neuron from the developing brain. They found that the neuron responded to the chemical neurotransmitter, which indicated the existence of specific receptor molecules.

So they turned their attention to the transmission side, measuring the speed of the neurotransmitters' release. They found that in a functional synaptic connection, the estimated 2,000 to 5,000 molecules of glutamate are usually dumped into the space between the two cells (the synaptic cleft) in about 1 millisecond. But in an immature connection, the transmitter release may occur 10 times slower, over a period of 10 milliseconds.

"We believe that a fusion pore on the surface of the vesicle controls the speed of the transmitter release," said Dr. Liu. "The size of the pore may determine the speed of release, which determines the functionality of the connection."

POSSIBILITIES FOR THE FUTURE

While the researchers don't know why this slow molecular release occurs, they suspect that if they could control it, they might be able to change the pace of a child's mental development, alter synaptic connections in adult brains and possibly even repair the damage done by degenerative brain diseases.

"For instance, if we knew that a child's eye would be damaged during cortical development due to a disorder, we might be able to delay cortical development until the eye could be repaired, helping to ensure that the child's visual system developed normally," said Dr. Renger.

There is also the possibility that they could learn to enchance or restore memory in humans.

"I'm not sure that improving cognitive function in a human being is good. Enhanced memory could be painful, if we were to remember all the bad experiences we've had," said Dr. Liu. "But restoring memory function would be meaningful. Helping people with Alzheimer's disease whose short-term memory doesn't allow them even to remember where they live -- that would be meaningful."