Clean water for Nepal is focus of MIT research 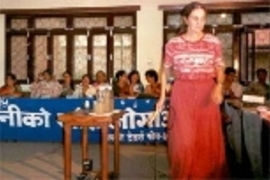 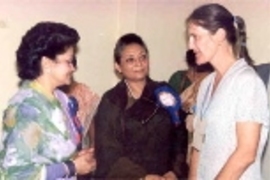 ↓ Download Image
Caption: Susan Murcott with Queen Aiswarya of Nepal (left) and Mrs. Ambica Shrestha (center), President of the Federation of Business and Professional Women - Nepal, one of the leading hosts and sponsors of the 2nd International Women and Water conference.
Credits: Photo courtesy / Susan Murcott 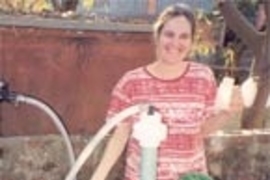 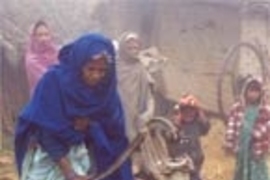 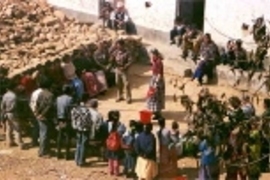 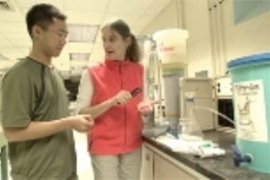 ↓ Download Image
Caption: At MIT, Murcott and graduate student Jason Low of civil and environmental engineering survey microbial colonies in a dish from one of the water filtration techniques they are examining for potential use in Nepal.
Credits: Photo / Donna Coveney

Caption:
Susan Murcott with Queen Aiswarya of Nepal (left) and Mrs. Ambica Shrestha (center), President of the Federation of Business and Professional Women - Nepal, one of the leading hosts and sponsors of the 2nd International Women and Water conference.
Credits:
Photo courtesy / Susan Murcott

Caption:
At MIT, Murcott and graduate student Jason Low of civil and environmental engineering survey microbial colonies in a dish from one of the water filtration techniques they are examining for potential use in Nepal.
Credits:
Photo / Donna Coveney

CAMBRIDGE, Mass. -- An MIT project that aims to help provide clean drinking water for people in developing countries began with an extraordinary conference whose participants included an MIT engineer, the queen of Nepal, and about 75 illiterate peasant women.

According to UNICEF, some 1.7 billion people worldwide lacked access to clean drinking water in 2000, and waterborne diseases are a major cause of illness and death across much of the developing world. In Nepal alone, some 44,000 children under the age of five die every year from such diseases, said Susan Murcott, a lecturer in the Department of Civil and Environmental Engineering (CEE) and leader of the MIT project.

Now in its third year, the project is part of a CEE graduate course. It includes annual trips to test possible solutions, meet the people who will use them, and collaborate with local partners, including the Environmental and Public Health Organization and several other national and international water agencies and non-governmental organizations. In January 2002, eight MIT students will spend about a month in Nepal, four will go to Haiti, and four to Brazil.

"We don't yet have all the answers, but we're moving toward them," Murcott said.

In 1998, Murcott (MIT SB 1990, SM) was invited to Nepal for the Second International Women and Water Conference. "Some of the women walked two or three days to attend. That's how important this was to them," she recalls. Participants included peasant women and the queen.

Murcott quickly understood their interest. Many women in Nepal and other developing countries spend hours every day toting water in vessels that, when full, can weigh some 30 pounds. Further, the sources they're carrying the water from are often polluted. So the women are also burdened with caring for family members -- especially children -- who contract water-borne diseases. "This leaves women with little time for education and economic advancement," Murcott said.

It was clear that the rural poor in particular needed a quick, cheap, relatively simple system to clean their water. But although conference participants also included a Nepalese dambuilder, microbiologists, and political activists, Murcott was the only water engineer.

Her expertise was in wastewater treatment for cities, not small-scale drinking-water systems for individual families. So she told the group, "I don't have the answers, but I have the tools to find them, and I'll make a commitment to work with you to figure this out."

Back at MIT she obtained permission from Dr. Eric Adams, director of the one-year CEE Masters of Engineering (MEng) program, to establish and supervise a new thesis project in Nepal. The new project would be in addition to one Murcott already co-taught with CEE Professor Emeritus Donald Harleman in Brazil.

The Nepal Water Project quickly became one of the most popular projects the students could choose from. Though limited to seven students that first year (1999), in 2001-02 sixteen are exploring water and wastewater problems not only in Nepal, but also in Haiti and Brazil.

At the most basic level, there are two treatment processes necessary to provide clean drinking water, Murcott said: removal of particles and inactivation and/or removal of the microorganisms that cause disease. The microorganisms attach to particles, so removing the particles "also removes about 90 percent of microbes," she said. "Then you have to get rid of the rest of the microbes."

She explained that water can be polluted in many ways, but the overwhelming problem in developing countries is microbial contamination due to poor sanitary practices. "It's not so dissimilar from what went on in cities like Paris and Boston 100 or 150 years ago."

Over the last few years Murcott has created a collection of water-treatment systems that could be appropriate for developing countries. Key criteria: technical performance, "low or no" cost (the average annual income in Nepal is $210), social acceptability and project sustainability. The researchers have then been testing the systems in the field.

First, however, they had to solve yet another problem. The team needed a way to detect -- and quantify -- microbial contamination. As Murcott explained, "not all of the water sources in Nepal are contaminated, so a microbial test can tell us whether a given source is good or not." Also, such tests are necessary to tell whether a given water-treatment system actually works by comparing levels of contamination before and after treatment.

In 1999 the team headed to Nepal with a standard microbial incubator. But such incubators run on electricity, which is not always available in the Nepalese hinterlands. The solution, the researchers eventually found, was back at MIT.

Murcott remembers one of her students inquiring whether she knew Amy Smith, an instructor at MIT's Edgerton Center and MIT graduate (SB 1984, MEng, SM, mechanical engineering). "You and Amy have a lot in common," said the student, who told her about Smith's engineering work in developing countries.

Smith, it turned out, had already invented an incubator that does not need electricity. In fact, she won the $30,000 Lemelson-MIT Student Prize in 2000 for the work. In fall 2000 Murcott and Smith worked together to adapt the incubator to Nepal. In January 2001, Smith joined the team in Nepal, they tested the incubator, and it worked.

One of the first processes investigated for removing particles involved coagulation, in which water is mixed with alum, a material that acts as a "particle magnet." In the technique, which Murcott had studied for years as applied to large-scale water and wastewater treatment plants, large conglomerations of particles and aluminum hydroxide sink to the bottom of a vessel and clean water can be poured off the top. In Nepal, however, village women said it was too much work.

"Ten years' research on coagulation down the tubes," Murcott said with a laugh. "But I don't mind. The idea is to solve the problem."

They turned to filtration. "Junko Sagara (MEng 2000) looked at current filtration methods in Nepal and their shortcomings," Murcott said. One such system, for example, is already used by the middle class. In a unit encased by stainless steel, water flows through a "candle" of fine white clay eight inches long by two in diameter. Particles are caught in the candle, and the remaining water drains out via a spigot.

Rural women, however, can't afford the system at some $25 per unit. Further, Sagara found that candle filters are slow. "They can barely handle the daily needs for drinking water for the typical family of six to eight," Murcott said.

Many systems that remove particles, like the candle filters, do not remove the final vestiges of microbial contamination. So the MIT team has also explored disinfection techniques.

They quickly found that chlorine, the principal disinfectant worldwide, is largely unavailable in Nepal. A promising alternative, however, is household solar disinfection (SODIS). Water is placed in clear plastic bottles and left in the sun until ultraviolet radiation kills the remaining microbes.

Amer Khayyat (MEng 2000) and Meghan Smith (MEng 2001) explored the effectiveness of the technique in Nepal. Their conclusion: SODIS is promising, but can be limited by inclement weather since it's dependent on sunlight. Further, Smith found that in the area of Nepal she studied, SODIS bottles had to be left for some two days to completely disinfect the water.

Another promising system that both removes particles and disinfects is the BioSand Water Filter (BSF) developed by Professor David Manz at the University of Calgary, Canada. The system essentially strains water through different layers of sand, removing the particles. In addition, microbes are removed in the top biological layer, or "biofilm."

The students who explored BSF in 2001 examined 42 of the 115 filters in Nepal. Their conclusion: it is the best filter currently available in Nepal, but it is not perfect. For one, it must be carefully maintained, with exact water and sand levels, and the equipment must be fitted correctly.

"So this year," said Murcott, "we've been able to recommend SODIS with more confidence, and have shown that the BSF is the best filter we've investigated to date."

Students in the current MEng class are exploring several other filters, including one from Nicaragua and another from India. They are also bringing a chlorine generator to Nepal to set up a microenterprise, creating a geographic information system map of arsenic in Nepal and developing a mathematical model to predict SODIS bottle temperatures in different climates to evaluate temperature disinfection.

Standing in her lab at MIT, Charles River water dripping through one potential filter, Murcott recalls meeting a Nepalese child she assumed was about eight. No, she was told, the child was actually 16. "About 50 percent of the children there are stunted on account of waterborne diseases," she explained. Susan Murcott and colleagues are working to change that.

The research is sponsored by MIT. Other sponsors and contributors have included the John R. Freeman Fund, Phipps and Bird, Inc. and Severn Trent de Nora.