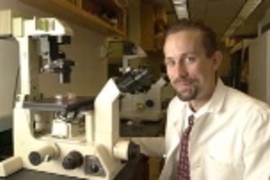 ↓ Download Image
Caption: Scientists including Dr. David Tuveson (above) of Professor Tyler Jacks' lab in the Center for Cancer Research has found that a leukemia drug also is effective in the lab against a type of abdominal cancer called gastrointestinal stromal tumor.
Credits: Photo / Donna Coveney

Caption:
Scientists including Dr. David Tuveson (above) of Professor Tyler Jacks' lab in the Center for Cancer Research has found that a leukemia drug also is effective in the lab against a type of abdominal cancer called gastrointestinal stromal tumor.
Credits:
Photo / Donna Coveney

CAMBRIDGE, Mass.--In a case of basic cancer research in the laboratory resulting in a quick payoff for cancer patients, researchers at the Massachusetts Institute of Technology report in the August 17 issue of Oncogene that they surmised that an existing leukemia drug might also work for an untreatable abdominal cancer.

Subsequent clinical trials proved them right. The FDA-approved drug Gleevec has resulted in dramatic improvements for many patients with the rare and otherwise incurable cancer called Gastrointestinal Stromal Tumor (GIST). (An initial case report of a successfully treated patient was published in the April 5, 2001, issue of the New England Journal of Medicine.)

Oncologist Dr. David A. Tuveson, a postdoctoral fellow in the laboratory of Tyler Jacks, professor of biology in the MIT Center for Cancer Research; and an instructor at the Dana-Farber Cancer Institute and Harvard Medical School, studies basic cancer biology mechanisms in the hope that a deeper understanding of these processes might lead to new therapeutics for patients.

In his investigation of GIST cells, he focused on the fact that the cells have a genetic mutation in the growth factor receptor c-KIT. The mutations cause the cells to proliferate out of control, which is one of the factors responsible for turning normal cells into cancer cells.

Tuveson, along with colleagues at MIT and from Dana-Farber, Brigham and Women's Hospital and Harvard Medical School, found that in the presence of a novel targeted chemotherapeutic drug termed STI571, the mutated c-KIT cells stopped proliferating and some even started to die off.

"We discovered that GIST cells required constant stimulation from the c-KIT oncogene to survive and proliferate in cell culture," Tuveson said. "By inhibiting the c-KIT enzymatic activity with STI571, a drug that provides a safe and effective treatment for a form of leukemia, we found that STI571 inhibited GIST cell growth."

STI571, now known as Gleevec, was developed by Dr. Brian Druker of Oregon Health Services University, in collaboration with drug manufacturer Novartis, for patients with a form of leukemia called chronic myelogenous leukema (CML). It was approved by the U.S. Food and Drug Administration for use in CML in May 2001.

"These cell-based studies support an important role for c-KIT signaling in GIST and suggest therapeutic potential for STI571 in patients afflicted with this tumor," the authors wrote. In addition to Tuveson and Jacks, the paper's authors include Nicholas A. Willis of MIT's Center for Cancer Research; James D. Griffin of Dana-Farber Cancer Institute; Samuel Singer, Christopher DM Fletcher and Jonathan A. Fletcher of Brigham and Women's Hospital; and Dr. George Demetri of Dana-Farber.

Demetri, the senior author, said, "This work is based on an understanding of the genetic mechanisms that characterize this type of cancer. This provides proof of the concept that the molecular understanding of cancer can generate truly effective and well-tolerated medications to treat human disease." Demetri also was senior investigator of the clinical trial for GIST.

GIST, which strikes connective tissue cells in the stomach or small intestine, affects an estimated 5,000 Americans each year. When GIST cannot be completely removed by surgery, the outlook for patients is bleak because the disease does not respond to chemotherapy or radiation therapy.

"Basic scientific observations inspired the use of this drug," said Jacks, an associate investigator for the Howard Hughes Medical Institute and director of the MIT Center for Cancer Research. "This is a great example of the importance of basic research and its role in promoting the development of more effective and less toxic drugs for use in people."

"Fortunately, the first GIST patient treated with ST1571 had a tremendous response," Tuveson said. "The results from two larger trials that examined GIST patients treated with STI571 were presented in May of 2001 at the annual American Society of Clinical Oncology conference, and both trials reported an extremely high response rate among the patients."

One of the goals of cancer research is to replace chemotherapy's shotgun approach, through which many healthy cells are killed off with cancer cells, with extremely targeted drugs that would pick off and destroy cancer cells like a sharpshooter.

This work is funded by the Howard Hughes Medical Institute.