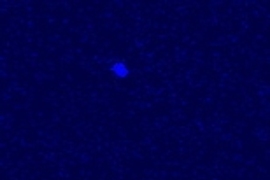 ↓ Download Image
Caption: A Chandra image of neutron star KS 1731-260, remarkably cool after 12 years of being bombarded with hot gas from a companion star, not visible here. The now dim KS 1731-260 is the light blue object slightly above the midline of this image.
Credits: Image courtesy / NASA/Chandra/Wijnands et al.

Caption:
A Chandra image of neutron star KS 1731-260, remarkably cool after 12 years of being bombarded with hot gas from a companion star, not visible here. The now dim KS 1731-260 is the light blue object slightly above the midline of this image.
Credits:
Image courtesy / NASA/Chandra/Wijnands et al.

CAMBRIDGE, Mass. -- Like a frozen turkey that just won't thaw, a strange star near the center of the Milky Way is surprising MIT experts and colleagues with its remarkably low temperature. The odd behavior is chilling current theories of stellar physics.

A famously battered neutron star named KS 1731-260 appears no hotter than some of its tranquil brethren, despite enduring the heat of constant thermonuclear explosions with the force of billions of hydrogen bombs every second across a region only a few miles wide for the past 12 years.

Dr. Rudi Wijnands, an astrophysicist at MIT's Center for Space Research, used the Chandra X-ray Observatory to measure the temperature of the neutron star at a very opportune moment, only months after the nuclear war apparently ended and the smoke cleared. He presented his team's findings September 5 in Washington, D.C. at a scientific conference entitled "Two Years of Science with Chandra."

"Twelve years of constant thermonuclear explosions: One would think that would heat things up," said Wijnands. "This leaves us wondering whether some neutron stars are in the freezer for a much longer time than previously thought and consequently take a long time to heat up, or whether they cool down incredibly fast. Either explanation has profound implications for our field."

Neutron stars are the dense, core remains of stars once many times more massive than our Sun. They are created in dazzling supernovae, in which the outer shell of the star explodes into space, and the core, containing about as much mass as the Sun, implodes and collapses into a sphere no wider than Cambridge, Massachusetts.

Despite their tiny size, neutron stars are visible in several ways. One is through accretion. Neutron stars are a strong source of gravity. When they exist in binary star systems, such as KS 1731-260, they can attract the gas from what is often a "healthy" hydrogen-burning companion star (although the nature of KS 1731-260's companion is not clear.) Gas spirals around the neutron star and comes crashing down onto its surface, leading to nuclear explosions. The fury glows predominantly in X-ray radiation.

Neutron star binaries can experience varying periods of active accretion. KS 1731-260's period was particularly prolonged, lasting from mid-1988 to the end of 2000. Other systems flare from week to week or year to year. When the stars are in quiescence, they are harder to detect.

Chandra has the resolution and photon-collecting power and is in the right energy range to detect neutron stars glowing dimly in quiescence. KS 1731-260 is the first neutron star enduring such prolonged accretion to enter into quiescence during Chandra's reign. Other systems only dump matter onto the neutron star for a short period at a time, so no one expects much heating.

The Chandra observation provided the first chance to test the theory of neutron star heating and cooling for a system with such prolonged episodes of accretion. The team found KS 1731-260 to be at least 10 times cooler than expected, a mere 3.5 million degrees. This is about the same temperature as neutron stars that get only a week's or month's worth of dumping. KS 1731-260 therefore appears to be much too cool, assuming that this and the other neutron stars have accretion episodes at roughly similar time intervals.

So what happened to the heat? There are complicated models of neutrino cooling to explain rapid temperature decreases. But maybe KS 1731-260 was in a relative deep freeze before 1988 and took 12 years just to get to the temperature it is today.

According to the popular model of neutron star heating and cooling, Wijnands calculated that KS 1731-260 would need to have been dormant (that is, no accretion) for over a thousand years to get so cold that 12 years of fury would only raise it to its current temperature.

"Neutron stars in such close binaries are not known to stop accreting for periods longer that about 100 years," said Walter Lewin, a professor of physics also at MIT. "We may have identified a new type of neutron star system that can lie dormant for thousands of years. If so, there could be hundreds of these systems in our Galaxy."

The next step is to use Chandra to take the temperature of scores of other neutron stars experiencing various phases of accretion and quiescence. Other members of the observation team include Jon Miller of MIT, Craig Markwardt from NASA Goddard Space Flight Center, and Michiel van der Klis from the University of Amsterdam.

The observation was made with Chandra's Advanced CCD Imaging Spectrometer, which was conceived and developed for NASA by Pennsylvania State University and MIT. For images, refer to http://universe.nasa.gov/press/images/neutron/.