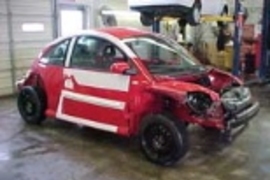 ↓ Download Image
Caption: This sequence of photos shows a Volkswagen Beetle being moved to the second floor of Building E40. The car, dubbed 'Miss Daisy' will be used to study how technology can aid elderly drivers. Here, the car is parked at Volkswagen Boston before being transported to campus.
Credits: Photo courtesy / Joe Warner, Volkswagen Boston 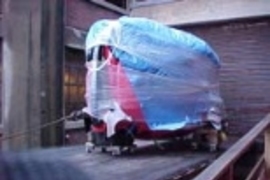 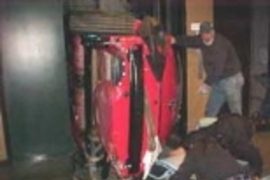 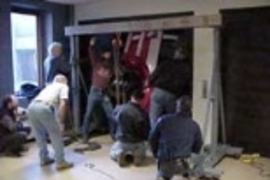 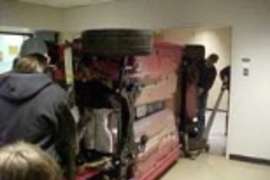 ↓ Download Image
Caption: The Beetle is maneuvered down a hallway while tipped on its side.
Credits: Photo courtesy / Joe Warner, Volkswagen Boston 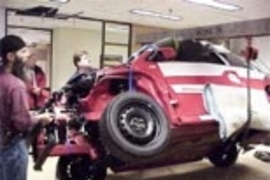 Caption:
This sequence of photos shows a Volkswagen Beetle being moved to the second floor of Building E40. The car, dubbed 'Miss Daisy' will be used to study how technology can aid elderly drivers. Here, the car is parked at Volkswagen Boston before being transported to campus.
Credits:
Photo courtesy / Joe Warner, Volkswagen Boston

Caption:
The Beetle is maneuvered down a hallway while tipped on its side.
Credits:
Photo courtesy / Joe Warner, Volkswagen Boston

Students are not the only members of the MIT community who can move large objects to unlikely places.

With little fanfare, researchers and MIT Facilities workers have matched the ingenuity of the hackers who placed a police car on the Great Dome in 1994.

The crew manipulated a cellophane-wrapped car through the loading dock of MIT Building E40, into the foyer, up the elevator shaft, and into its final home in the Center for Transportation Studies' Age Lab on the second floor on Saturday, February 10.

"It was pretty cool. You don't see a car in an elevator shaft that often," said Dr. Joseph Coughlin, director of the AgeLab.

The cherry-red Volkswagen Beetle, provided by VW America, was promptly dubbed Miss Daisy after the movie about an elderly woman and her chauffeur. It will be used in studies to determine how technology can aid--but not overwhelm--elderly drivers. "We're using it as a platform to envision what lifelong transportation will look like for aging boomers by fully leveraging and exploiting computer systems in a car," Dr. Coughlin said.

To that end the researchers will add new technologies to the car, such as a collision-avoidance system, then run computer simulations that require older drivers to use these technologies. The simulations include driving on a rainy night, police actions, and heavy traffic.

The idea is to slowly load up the driver with these new technologies to determine what constitutes information overload. "We want to optimize the design and integration of the technologies," Dr. Coughlin said. "The challenge is to keep from overwhelming the driver so he or she either gets in an accident, or turns the technology off."

Although Miss Daisy is missing an engine, everything else works. It even includes a force-feedback system so the brakes really feel like brakes. "Volunteers won't genuinely think they're driving down Memorial Drive, but they'll get a fairly realistic feeling of doing so," Dr. Coughlin said. Overall, he said, Miss Daisy is "a better way for us to get data."

So how do you get a car into the second floor of a building? First, said Dr. Coughlin, a team led by Joe Warner of VW Boston prepared Miss Daisy by draining all fluids, removing the engine, and putting in the wiring to allow the instrumentation.

Then the car, wrapped in cellophane to prevent scratches, was moved to E40 via a flatbed truck. From there, a Facilities team led by Joseph Collins put it on dollies and pulled it on its side through the freight door to the elevator.

Chains were hooked to the back axle of the Beetle and to the underside of the freight elevator (which was parked on the second floor). When the button was pushed for the third floor, the elevator hoisted the car up. "In the elevator shaft we had only a few inches to spare on any given side," Dr. Coughlin said.

Five Facilities men pulled the car out of the elevator, back onto dollies (via block and tackle), and down the hall to its new home. That in itself was a feat: the previous day the team had to remove two interior glass walls of a conference room.

"The Facilities crew was amazing," Dr. Coughlin said. "They started this job Friday morning, and by Monday morning at 11am a meeting was being held in the same conference room."

The final tasks are to instrument the car and place a daisy in the VW Beetle's signature flower vase next to the steering wheel.

The AgeLab research on older drivers is sponsored by Electronic Data Systems, the American Association of Retired Persons (AARP) Services, the Hartford Financial Services Co., and several automobile companies. The AgeLab is also home to a number of other health, communications, and behavioral studies with the overall goal of developing the technologies, products and services that will allow older people to live independently.