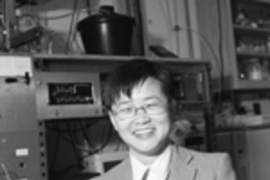 With a proud smile, Professor Jackie Ying held up a small glass jar containing a white fluffy powder resembling fresh snow on a very cold day. Yet this powder, far from melting at the touch of a warm hand, can withstand temperatures up to 1,300ï¿½ï¿½ï¿½C.

The object of her attention is a new material that could make it easier to burn methane (the principal component of natural gas) while drastically cutting emissions of pollutants from natural-gas power plants. Further, the procedure for creating the material paves the way for materials that could improve other high-temperature processes such as the production of some chemicals.

The work relies on microscopic "reactors" so small that more than a hundred could fit on the period at the end of this sentence. It was reported in the January 6 issue of Nature by Dr. Ying, associate professor of chemical engineering, and Andrey J. Zarur (who expects to receive the PhD this year), research manager and chief scientist at Starlab in Belgium.

Many industrial processes rely on catalysts, materials that facilitate key chemical reactions by, for example, lowering the temperature at which a given reaction can proceed. It is difficult, however, to use catalysts at extremely high temperatures (over about 1,000ï¿½ï¿½ï¿½C) as most are destroyed.

Enter natural gas, a fuel for power plants. Natural gas is very abundant in the United States and environmentally friendly. It produces less of the greenhouse gas carbon dioxide than any other fossil fuel, Professor Ying said.

However, it is difficult to burn, requiring very high temperatures (around 1,400ï¿½ï¿½ï¿½C) to produce a stable flame. Temperatures can go even higher as combustion continues. Among other disadvantages, at such temperatures "nitrogen and oxygen in the air combine to form nitrogen oxide, a pollutant that contributes to acid rain and smog," Professor Ying said. Burning at lower temperatures would create little NOx and cut emissions of greenhouse gases like unburned methane.

To that end, two groups of catalysts have been studied. Those based on noble metals, however, are unstable at the temperatures needed for efficient ongoing combustion (about 1,300ï¿½ï¿½ï¿½C). Catalysts based on other metals allow the combustion process to start (known as light-off) at 700ï¿½ï¿½ï¿½C, but the Holy Grail for light-off is actually around 400ï¿½ï¿½ï¿½C.

That was the challenge the MIT researchers decided to tackle. Could they create a catalyst that would allow light-off at a low temperature but would also be stable at operating temperatures up to about 1,300ï¿½ï¿½ï¿½C?

The researchers' solution drew from years of work on nanoporous and nanocrystalline materials -- those containing pores or crystals only billionths of a meter in diameter. "I'm interested in using these materials to realize goals that aren't possible with conventional technologies," Professor Ying said.

They created the new barium hexaaluminate (BHA) catalyst via a reverse microemulsion, in which water droplets only nanometers in diameter are suspended in oil. Each droplet is, in effect, a miniscule reactor. That's because when added to the water-oil mixture, the principal "ingredients" for the catalyst preferentially move from the oil into the water droplets, where they react. A final heat treatment and powder recovery complete the process.

Professor Ying explained that conventional approaches for producing BHA result in a material that isn't well mixed before the heat treatment. As a result, the crystallization must be conducted at temperatures so high that particles undergo severe growth. That decreases their surface area, which in turn decreases their reactivity and limits light-off to about 700ï¿½ï¿½ï¿½C.

In the new process, however, the diffusion of ingredients into the water droplets creates a much more homogenous mixture, which means that the final crystallization heat treatment can be conducted at a lower temperature. That lower temperature, Professor Ying hoped, would suppress particle growth, maintain the high BHA surface area and reactivity, and ultimately allow a lower light-off temperature.

She was right. The new BHA crystals were only 30 nanometers in diameter, even at 1,300ï¿½ï¿½ï¿½C, giving them a surface area 10 times higher than the surface area for BHA produced by conventional processing. Light-off went down to 600ï¿½ï¿½ï¿½C.

The researchers knew that another material -- ceria -- is an active catalyst at low temperatures and might allow the desired light-off. Above about 600ï¿½ï¿½ï¿½C, however, ceria crystals agglomerate, destroying the material.

The solution: add ceria to the reverse microemulsion used to produce the BHA particles. The ceria, too, diffuses from the oil into the water droplets, resulting in BHA particles covered with discrete deposits of ceria that in micrographs remind one of fingerprints over a circle. Because the ceria crystals are anchored to the BHA and are separated from one another, even at very high temperatures they cannot fuse together.

The end result: Professor Ying and Dr. Zarur's ceria-coated BHA has a light-off of just about 400ï¿½ï¿½ï¿½C and can withstand temperatures higher than 1,100ï¿½ï¿½ï¿½C. The two also found that their catalyst is stable in the presence of water vapor and other potential poisons.

"This combination of low-temperature catalytic activity, high-temperature thermal stability, and poisoning resistance renders our catalysts interesting for potential practical applications in ultralean catalytic combustion of methane," the authors conclude in Nature. Further, Professor Ying said, the overall process "could be extended to other systems and reactions of interest."

The patent-pending process reported in Nature was funded by the David and Lucile Packard Foundation through a $550,000 Packard Fellowship Professor Ying received in 1995. She emphasized the importance of these discretionary funds, which allow her to pursue potentially risky areas of research like that described in Nature. The authors also acknowledged the Center for Materials Science and Engineering and Michael Frongillo for use of and assistance with electron microscopy facilities.

Professor Ying, MIT's first Packard Fellow in engineering, was named one of the world's 100 best young innovators by Technology Review magazine in1999. Her current work in this area is funded by ABB Alstom Power.

A version of this article appeared in MIT Tech Talk on January 12, 2000.