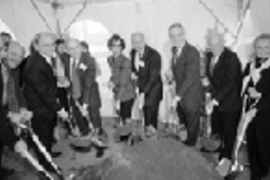 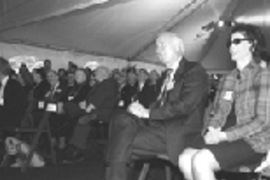 ↓ Download Image
Caption: Ray and Maria Stata enjoy a moment at the groundbreaking ceremony for the building complex named after them.
Credits: Photo / Donna Coveney 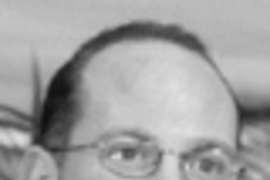 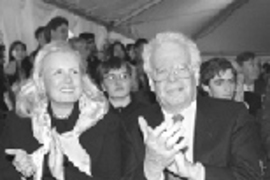 Caption:
Ray and Maria Stata enjoy a moment at the groundbreaking ceremony for the building complex named after them.
Credits:
Photo / Donna Coveney

Shovels turned the earth in unison inside the elegant white tent last Friday at the groundbreaking ceremony for the new Ray and Maria Stata Center for Computer, Information and Intelligence Sciences.

The Stata Center will be built on Vassar Street where Building 20, known as MIT's original "magic incubator," stood from 1943 until last June. The center will include the Alexander Dreyfoos Building, housing the Artificial Intelligence Laboratory, and the William H. Gates Building, home of the Laboratory for Computer Science. Frank O. Gehry Associates is the architect for the 430,000-square-foot facility.

In welcoming the standing-room-only crowd to the groundbreaking, President Charles M. Vest said, "This is a wonderful moment... and one we have long been waiting for. This is a truly symbolic moment and a symbolic site.

"We have been referring to the Stata Center as the next magic incubator in homage to Building 20 and its vast array of contributions to the intellectual life of MIT and to the welfare of the nation and the world. Activities on this spot did much to define MIT. This next incubator will take a somewhat different form, which you can see in the videos and photographs on display at the reception following this ceremony.

"Today's ceremony is the culmination of a great deal of planning and work on the part of many, many people, including the faculty and staff and students who will work in these buildings; the architects, designers and planners who have translated an exciting and future-oriented intellectual agenda and vision of academic community into an extraordinary physical plan; our colleagues in the City of Cambridge who have worked shoulder to shoulder with us to pave the way for this landmark project; the project team, who have labored intensively over the past two years getting us to this point... and finally, the people whose generosity and vision are making all of this possible: most notably Ray and Maria Stata, Alex Dreyfoos, and Bill and Melinda Gates.

"They understand the importance of the physical environment and infrastructure to our lives and work -- and they are playing a major role in the renaissance of the MIT campus.

"This is a renaissance that goes far beyond the 'look' of our campus. As Winston Churchill once said, 'We shape our buildings, and afterwards our buildings shape us.' And, in the case of universities, we reshape them and they reshape us! In that spirit, what we are celebrating today is not only the start of construction -- although that is cause enough for celebration -- but a major step in enhancing our learning community. We have the best faculty and students, and soon we will have the group of buildings they deserve."

Provost Robert A. Brown commented, "This is the culmination of the beginning of a dream people here have had for 25 years -- a dream to physically unite EECS [the Department of Electrical Engineering and Computer Science] and the Lab for Computer Science." Provost Brown also led a round of applause for former provost Joel M. Moses, Institute Professor in EECS, for his efforts to realize this dream.

"The faculty all became invested in the project to create a community for research and education, to take the vision and craft it. Frank Gehry worked hard to create a facility that has all kinds of spaces of all shapes and sizes for living and working," Provost Brown continued.

"But in many ways, the Stata Center is more than that. It is also the northeast entrance to a new part of our campus. It will define what MIT will be about. Think of it as an interface between Cambridge and MIT. It will have an impact on everyone who drives by it, works in it or lives in it."

Cambridge Mayor Anthony D. Galluccio thanked the President's Office of Government and Community Relations and the Stata Center donors. "The relationship we have built is a foundation. Now, let's look beyond the boundaries of these buildings to the neighborhood next door. I urge you to be a partner with our schools and in the community," he said.

"This occasion marks the fruition of many years of hard work, a decades-long gestational period," said Chris Terman, head of the client team and a senior lecturer in EECS. "And this gift by the Statas is just one of the many ways they support us. The Gehry plan fulfills our expectations and then some -- Frank has widened our horizons as we hoped he would. The building will engage our minds and lift our spirits for decades to come." He thanked project manager Nancy Joyce for "holding it all together and keeping things moving forward," as well as Mr. Dreyfoos and Mr. and Mrs. Gates.

Beth Rubenstein, assistant city manager for community development, thanked MIT for "great sensitivity in the design of this building and for locating the parking underground. Great attention was also shown to how pedestrians will travel to this building, and the plaza will be available to the larger community. We look forward to many more years of close cooperation." She stood in at the ceremony for City Manager Robert Healy.

"A project like this affects not just our campus, but our city. The Stata Center is a wonderful example of a civic partnership in the best sense of the word," President Vest said. He introduced other officials in attendance, including State Reps. Paul Demakis (in whose legislative district the Stata Center will be situated) and Jarret Barrios (who pointed out that his own district is "right across the street"); Susan Clippinger, director of the city's Department of Traffic, Parking and Transportation; Charlie Sullivan, executive director of the Cambridge Historical Commission; and Roger Boothe, director of urban design for the city of Cambridge.