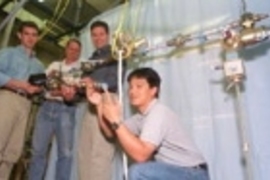 CAMBRIDGE, Mass. -- The first hands-on experiment to fly aboard the International Space Station could lead to better telescopes, robotic arms and other devices affected by vibrations in space.

The experiment, which was launched to the ISS today, September 8, aboard the space shuttle Atlantis, was developed by MIT engineers and colleagues in collaboration with the Air Force Research Laboratory (AFRL). It is expected to become operational in early November with the arrival of the first crew of astronauts who will run it.

"Unlike many other space experiments, ours is really a highly interactive laboratory," said Associate Professor David W. Miller of the Department of Aeronautics and Astronautics, co-principal investigator for the work with AFRL's Rory Ninneman. Researchers on Earth will be in regular contact with the astronauts running the hardware, who will send back data and receive software for new tests.

"The MACE-II experiment will be the first active US payload on the International Space Station," said Dr. John Uri, ISS Lead Increment Scientist at NASA's Johnson Space Center. Other experiments will also be aboard the ISS, but the MIT work is the first hands-on experiment. The others are passive.

"As a collaborative effort between the AFRL and MIT, MACE-II brings together leading organizations in industry, academia and government," Dr. Uri said. Being able to fly this experiment at this early stage of the assembly of the ISS demonstrates the flexibility of the program in accommodating the needs of the research community."

The Middeck Active Control Experiment II (MACE II) is key to learning more about how things move and vibrate in space, and how to sense and control those vibrations. The six-foot-long instrumented truss that the astronauts will work with "allows us to test our techniques for predicting motion and controlling it," Professor Miller said.

Structures in space like telescopes and robotic arms are sensitive to vibrations and can be ruined because of them. Yet this can't be tested on Earth first because structures behave differently on the ground and in space due to effects caused by Earth's gravitational field. "The MACE II laboratory allows us to test the effects of vibrations in zero gravity," said Professor Miller, who is also director of the MIT Space Systems Laboratory.

MACE I flew for two weeks in 1995 aboard the space shuttle. It was preceded by two other shuttle experiments led by Professor Crawley. MACE II -- the experiment headed for the ISS -- will stay in space for about four months. "With multiple months as opposed to weeks for conducting tests, we'll really be able to do a lot," Professor Miller said.

"The effectiveness of a research lab depends upon how closely the researcher is able to interact with the experiment as well as how easily the experiment can be modified," Professor Miller said. This process is difficult to do when the researcher is on the ground and the experiment is in space. However, MACE was designed with reconfigurable hardware and reprogrammable software. Long-duration testing on the ISS finally allows us to demonstrate how MACE allows the researcher to have a virtual presence with a remotely located experiment."

MIT is linked to the historic opening of the ISS in yet another way. The first crew to live aboard the ISS will be commanded by MIT alumnus William M. Shepherd (SM in mechanical engineering and Ocean Engineer in ocean engineering, 1978). Mr. Shepherd will have the primary responsibility for operating MACE-II.

Mr. Shepherd's crew is scheduled to be launched on October 30 aboard a Russian Soyuz launch vehicle from the Baikonur Cosmodrome in Kazakhstan. After nearly four months in space, the crew is scheduled to return to Earth aboard the space shuttle Discovery in February 2001.

The Air Force Research Laboratory and MIT jointly manage the MACE-II program. In addition to Professor Miller, MIT staff involved include Air Force Col. (ret.) Peter W. Young, a senior lecturer in the Department of Aeronautics and Astronautics. Col. Young played a key role in advocating the reflight of the MACE hardware. "Helping get the MIT MACE project back into space and onto the ISS was an extremely satisfying and rewarding experience," Col. Young said.

The work was funded by the US Air Force Research Laboratory.