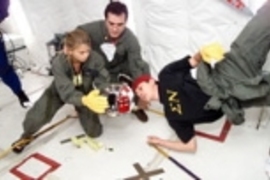 Introducing MIT's SPHERES project, in which 13 undergraduates in an MIT course have developed and are testing three satellites the size of volleyballs that they believe will help meet the latter goal. The Synchronized Position Hold Engage Re-orient Experimental Satellites will allow researchers to test a variety of technologies key to formation flying.

Two of the devices, which communicate with each other and a computer, were tested aboard NASA's KC-135 airplane last week. The first tests aboard the KC-135, which allows satellites (and researchers) to become essentially weightless for short periods of time, were conducted in late February. At that time the team successfully operated two SPHERES at the same time inside the plane, and collected data that helped improve the devices for the latest mission.

"Rather than fly one large, expensive satellite, the idea is to network together several small ones, much like how computers progressed from large mainframes to networked PCs," said Associate Professor David W. Miller. The application of interest to the SPHERES team: a space telescope with a higher resolution than the Hubble, created by stringing across the sky several tiny satellites outfitted with mirrors.

For example, the SPHERES are being developed to ultimately fly inside the Space Shuttle and the International Space Station (ISS), where astronauts could use them to test different parameters related to formation flying. (Having the testbed satellites inside a spacecraft has a number of advantages, including lower cost because they don't have to be protected against the extreme environment outside.)

The project is also, however, an educational experiment. This is the first time that the Department of Aeronautics and Astronautics has offered undergraduates the opportunity to design, implement, and test an aerospace product within one course (conducted over three semesters). "It gives undergraduates a lifecycle experience in the development of an aerospace product," Professor Miller said.

Commented MIT senior and SPHERES researcher David A. Carpenter from Tyler, TX: "The most exciting aspect of the SPHERES project has been the physical manifestation of the ideas developed over the past year. The project was introduced as a set of functional requirements in February 1999, and by February 2000 we had fully integrated flight hardware."

Along the way the students have worked with a local company, Payload Systems, Inc., to turn their ideas into reality. They've also "seen every hoop you have to jump through at NASA" to get an experiment approved by that agency for flights aboard the KC-135, Professor Newman said. All thirteen undergraduates are also authors, with Professor Miller, of a paper on the work presented in January at a meeting of the American Astronautical Society.

"To me, the best part of this course has been the camaraderie that has developed within the team, not only between students, but also between the students, faculty, and staff," said MIT senior and SPHERES researcher Allen Chen from Lawrenceville, NJ. "The long duration and integrated nature of the project force a lot of interaction between team members; that interaction has led to a closeness that isn't usually seen in other classes."

Those comments are echoed by MIT senior and SPHERES researcher Bradley M. Pitts from New York, NY. "The best part for me has been working closely with the professors, post-docs, and other students. It is through these interactions that you really see how science and engineering work. It becomes clear that it is not the equations that truly matter, but instead the method, theory, concepts, and way of thinking that get the problem solved."

A space telescope composed of many tiny satellites flying in formation can only work if the positions of those satellites can be very accurately controlled. Enter SPHERES. The satellites were created to "research, develop, and validate key formation flight technologies," Professor Miller said.

For example, they allow researchers to test different control algorithms, as well as metrology (how the system measures things and how it navigates) and autonomy (how each unit can make decisions on its own without human intervention). On Earth and aboard the KC-135 or ISS the SPHERES can maneuver in many different directions, and identify their positions with respect to each other.

There are other projects involving satellite formation flight that are underway at organizations such as Stanford and NASA's Goddard Space Flight Center. The SPHERES project was designed to complement that work.

Last fall the team tested the SPHERES in the lab at MIT. Now they're running similar tests in microgravity aboard the KC-135. "On Earth, gravity limits how things can move," Professor Newman explained. "In space, there are many more degrees of freedom." As a result, even the most careful ground-based tests are not necessarily representative of conditions in space. Hence the importance of testing the SPHERES in both environments.

A trip aboard the KC-135 is akin to a roller-coaster ride. At the top of each "wave," researchers (and SPHERES) have 20 seconds of microgravity. "It's similar to a swing," Professor Miller said. "When you are at the bottom of a swing, you feel heavier, while at the top you feel lighter." Overall, the researchers hope to get a total of 120 minutes of microgravity between the February tests and those being conducted now.

All thirteen students are participating in the flights. "Flying on the KC-135 was easily one of the most exciting opportunities I've ever had," said Mr. Carpenter, who also noted why further tests aboard the shuttle or ISS are important. "The short periods of microgravity provided by the KC-135 are suitable for the types of maneuvers and tests we are attempting right now, but for more involved experiments, longer durations are required."

Getting the satellites aboard the shuttle or ISS is indeed the ultimate goal of the project, said Professor Miller. Although the students involved will graduate before SPHERES in space can become a reality, their contributions will have paved the way.

The work is sponsored in part by the MIT Department of Aeronautics and Astronautics, the US Air Force, and NASA's Goddard Space Flight Center.