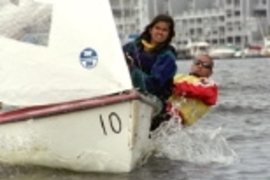 Sailing through college at MIT can hardly be a breeze, but three seniors have managed to accomplish that and qualify for the national collegiate coed sailing championships to boot -- the first time in 16 years an MIT sailing team has attained that goal.

Sean Fabre, Madhulika Jain, Alan Sun and a fourth team member, sophomore Erin Shea, will head to King's Point Merchant Marine Academy near Queens, NY on June 5-7 to vie for the national title and possible All-American status, which will be determined based on their performance at the championship regatta.

While MIT holds more national titles in sailing than any other school in the nation, the Institute hasn't won the big trophy since 1957 when pre-college sailing caught on in the United States and many skilled young sailing competitors begain opting for college education at NCAA Division I schools. Before that, MIT was on an even keel with other colleges that took their novice freshmen sailing teams and brought them "up to national level in four years," said head coach Fran Charles, who has coached the sailing squad for the past eight and a half years.

The coed team has won 14 trophy regattas this year alone and received numerous other decorations. They took second in the Harry Anderson and the Schell Trophy regattas and fourth in the Atlantic Coast Championships, all of which throw together the top teams in the nation.

The team is also the first MIT winner of the Thompson Trophy, taken by Mr. Sun, a management major from St. Croix, Virgin Islands, and Ms. Jain, a biology and computer science major from New Delhi, India. The two (skipper and crew) received the MIT team's Most Valuable Player award three times, and have been nominated for the national award for sportsmanship in sailing by Harvard, Yale and several other competitors.

Mr. Sun and Ms. Jain, who have sailed together three years, are an interesting multicultural mix of sailing experience. Mr. Sun, the skipper, grew up in the Virgin Islands (his parents are from Trinidad; his grandfather is from Hong Kong), where he learned to sail in the Caribbean at age eight and started racing at age nine. Before that he competed in swimming meets starting at the age of six.

During high school, he spent four years racing as the youngest crew member on a five-man team that made an unsuccessful Olympic bid. At the same time, he played varsity soccer and did well in that, too.

When he got to MIT, he wanted to play soccer and sail, but conflicting game/race schedules made that impossible. He realized within the first week on campus that he'd have to make some decisions about how to spend his time.

Ms. Jain, on the other hand, learned sailing in a Physical Education course her freshman year. She had rowed in rowboats in India and punted in Oxford, England when visiting relatives, but never sailed.

Coach Kyle Welch, who taught Ms. Jain that first year, was keeping his eye out for a partner for Mr. Sun.

"Kyle invited me to join the team and I said, 'Sure. No one's ever asked me to join a team before,'" said the 108-pound student, who plans to continue sailing during her graduate studies in biology at the University of California at San Francisco. "I think he asked me because of my weight -- both people combined need to weigh 260 to 270 pounds -- and the fact that I wasn't scared. Spring sailing is cold and really windy and scares away a lot of people."

It was the spring sailing that scared away Mr. Sun's crew his freshman year, clearing the way for Ms. Jain to join him. "It was a long learning process to get [Ms. Jain] to the point where she is. Now she's one of the best crews in the nation," said Mr. Sun.

If the two win the national championship, they'll almost certainly be the first Caribbean-Indian team to hold the title, and the first African-American man and Indian woman to gain All-American status.

The other MIT boat in nationals will be skippered by Mr. Fabre, who will earn his degree in management, and Ms. Shea, a physics major. The two have proved themselves on the water over and over this year, taking number one in the A Division. (Each school sends two boats to races, categorized as either A or B division. At the highest levels of competition, differences in skill level between the two divisions are negligible, said Coach Charles.)

Eighteen schools will be in New York next week for the championships. "Harvard has the most talent in the country right now. St. Mary's from the mid-Atlantic region and the Naval Academy -- these are the players," said Mr. Charles. And this year, after a 16-year hiatus, MIT is back among them.