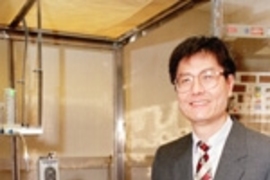 A well-known chemical receptor in the brain associated with learning and memory probably also plays a key role in fetal development of the respiratory system, an MIT researcher and colleagues report in the May 1 Journal of Neuroscience.

The work indicates that "it would be prudent for pregnant women to avoid prolonged exposure to substances that affect the activity of this receptor," said Dr. Chi-Sang Poon, a principal research scientist in the Harvard-MIT Division of Health Sciences and Technology (HST) and first author of the paper. Such substances include alcohol, PCP (angel dust), and some common anesthetic and analgesic drugs such as ketamine.

Mutant mice lacking the receptor "couldn't breathe or suckle well," said Dr. Poon, who noted that these symptoms are common in premature babies and are risk factors for sudden infant death syndrome. "Our study indicates a possible connection between abnormal receptor activity and problems in newborns," he said, although he stressed that more studies are needed to clarify this.

In a twist that took the researchers by surprise, they also found that a lack of this receptor led to high amounts of long-term synaptic depression (LTD), an activity linked to learning and memory. The kicker: the increased LTD was found in the brain stem, an area of the brain not usually associated with such "higher-level" functions.

"Conventional wisdom is that the brain stem coordinates lower behaviors like breathing and other vital functions, while the forebrain handles intelligence," Dr. Poon explained. "The discovery in the brainstem of activity associated with learning supports my argument that there's also a lot of intelligence going on beneath our conscious being."

The N-methyl-D-aspartate (NMDA) receptor is key to the communication of a chemical signal between two nerve cells. That process, repeated between many cells, "is how a signal is propagated through the brain," Dr. Poon said. The effectiveness of the transmission between cells can change or be modified over time. "That plasticity is widely thought to be the basis for learning and memory," he said. "If the modification lasts for a long time, you remember!"

There was an unexpected hitch: the animals died soon after birth. Professor Tonegawa and colleagues later solved the problem by restricting the NMDA knockout to a specific area of the brain rather than throughout the organ. "But I was always interested in exactly why the first animals were dying," Dr. Poon said. He and his colleagues explored a variety of potential reasons for the deaths.

Ultimately they found the answer: the lack of NMDA receptors during prenatal development led to fatal respiratory distress. (Normal newborn mice treated with drugs that block NMDA receptor activity did not have any respiratory problems.)

"This is the first indication that prenatal development of specific regions in the brain controlling vital functions is very much dependent on NMDA receptor activity, and a lack of NMDA receptor activity in the fetus could affect newborns' breathing after birth," Dr. Poon said. In addition, the unexpected increase in LTD in the brainstems of the mutant mice "shows that learning and memory at a subconscious level could profoundly influence our vital functions."

The work was supported by the National Institutes of Health, the Office of Naval Research and the Human Frontier Science Program.

A version of this article appeared in MIT Tech Talk on May 3, 2000.