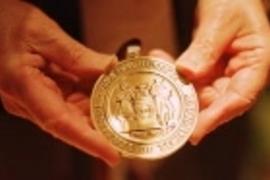 ↓ Download Image
Caption: This medal was given to four distinuished honorees -- faculty at other universities -- as part of the School of Humanities's 50th anniversary celebration.
Credits: Photo / Laura Wulf

Caption:
This medal was given to four distinuished honorees -- faculty at other universities -- as part of the School of Humanities's 50th anniversary celebration.
Credits:
Photo / Laura Wulf

The 50th anniversary celebration of the School of Humanities, Arts, and Social Sciences (SHASS) culminated in a gala dinner dance held at the Museum of Fine Arts in Boston on Saturday, Oct. 7.

The festive evening opened with a ceremony in which Philip S. Khoury, dean of the school, announced that SHASS would award medals of honor to four distinguished guests: Hilary Putnam, the Cogan Research Professor of Philosophy at Harvard; Louise Glï¿½ï¿½ck, the Preston S. Parrish '41 Third Century Lecturer at Williams College; Dame Gillian Beer, the King Edward VII Professor of English Literature and president of Clare Hall in the University of Cambridge; and Kenneth J. Arrow, the Joan Kenney Professor of Economics emeritus and Professor of Operations Research emeritus at Stanford University. Each distinguished guest had served as a panelist in one of the SHASS colloquia held on October 6 and 7 at MIT.

Dean Khoury, welcoming the distinguished guests, MIT faculty and friends of the humanities, said, "For our 50th anniversary, the school's leadership decided that we wanted to establish a very special honor for some very special people."

To this end, he said, a member of the MIT faculty would introduce each of the four awardees, presenting each with a medal cast especially for the occasion.

Commenting on the selection criteria, Dean Khoury said, "Our honorees or honorands had to be in and of the humanities, arts or social sciences. They had to have made major contributions to knowledge in the areas in which they work and to have been recognized by others for these contributions."

In keeping with the celebratory spirit of the occasion, Dean Khoury added, "And they had to be individuals who were not already on our faculty, but whom we would love to have on our faculty."