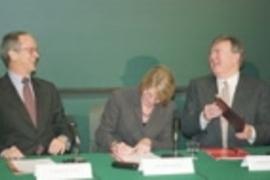 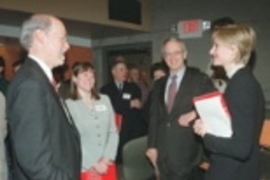 The gift is expected to total $350 million over the next 20 years. The February 29 edition of the Chronicle of Higher Education listed the McGovern gift as the largest to a university; the previous record was $300 million.

In his opening remarks at an event to celebrate signing the memorandum of agreement between MIT and Mr. and Mrs. McGovern, President Charles M. Vest said, "This is by any measure a truly historic moment for MIT. The creation of the McGovern Institute will launch one of the most profound and important scientific ventures of this century in what surely will be a cornerstone of MIT scientific contributions from the decades ahead.

"There is no greater mystery than how the brain functions and what the human mind is. And there is no field in which major advances would have more profound effect on human progress and health. For these reasons, we have made the neurosciences one of MIT's most important strategic priorities for the future.

"We believe that the synergy generated by this growing community of world-class researchers investigating various aspects of the brain, mind, learning and memory, together with activities in computer science, in chemistry, and in the physics and mathematics of large complex systems makes MIT an ideal setting for this new institute. And we are deeply grateful to Pat and Lore McGovern for their visionary commitment to MIT, and for their extraordinary leadership as philanthropists.

Mr. McGovern said, "It's a great thrill for Lore and me to reach a moment of conclusion and commitment, to come up with a world-class center for the study of how the brain affects human behavior, communications and perception," said Mr. McGovern.

The McGovern Institute's founding director will be Institute Professor Phillip A. Sharp, an internationally renowned molecular biologist who won the Nobel Prize in 1993 for his discovery of surplus DNA and gene-splicing.

At the ceremony, President Vest and Mr. and Mrs. McGovern discussed the mission and background of the McGovern Institute with members of the MIT faculty and administration, representatives of IDG and reporters from the Wall Street Journal, the New York Times and the Boston Globe.

The new institute's mission is aggressive exploration of human learning and communication through interdisciplinary research that encompasses neuroscience, molecular neurobiology, bioengineering, cognitive sciences, computation and genetics. Widely seen as the next new frontier of science, these areas of study have profound implications for human health and quality of life.

"After doing very extensive investigation it came to us very clearly, and even from reports from the other sites -- executives and academic leadership -- that at MIT there was a unique set of resources in the area of molecular and cell biology and understanding of the neuron as a cellular element, and outstanding work being done in the cognitive sciences, and a commitment to expand greatly the resources and systems of neuroscientists to be able to understand the whole functions of the brain," Mr. McGovern said.

"We also said that MIT was unique in its willingness to be very collaborative, to bring people from different disciplines together, and to work as a community. So they said the cultural environment at MIT was uniquely supportive of the success of an interdisciplinary center like the Institute for Brain Research," he said.

Mr. McGovern founded IDG, the world's leading computer publishing, research and exposition management company, in 1964. He has launched more than 290 computer magazines and newspapers in 80 countries, including Computerworld, the Industry Standard and PC World.

Mr. McGovern said he and his wife decided to devote a major portion of their wealth to brain research because they believe neuroscience is poised to make major advances in understanding the human mind and behavior.

Mr. McGovern has had a lifetime interest in understanding the brain and its impact on human behavior. He received the SB in 1959 from MIT, where his major was life sciences with a special interest in neurophysiology. He took computer science courses to contribute to developing computational models for the function of neural networks.

Mrs. McGovern has been involved in the technology field since the early 1970s. A 1976 co-founder of Vector Graphics, one of the earliest PC companies, she is currently involved with sevral Silicon Valley startup ventures.

The couple have been married 18 years and have adult children by their previous marriages. Daughters Michelle Harp and Elizabeth McGovern were introduced by Mrs. McGovern at the signing ceremony in Rm 9-057, which was attended by a number of journalists and MIT faculty members who have been involved in neuroscience or the creation of the McGovern Institute.

Mrs. McGovern said, "One of the things we hope we will get out of doing this today is that we may stimulate a lot of other people to start thinking in major philanthropic ways, because how much better can you give back to society than to do something that will impact all of us?

"The journey has only begun. I hope all of you will be watching and celebrating with us as we bring peace and unity to the world because of what we understand about the brain."

"I believe this is a time in which brain research is ready to take on a new dimension," Professor Sharp said. "The brain has to be considered the miracle of evolution. It's the center of all of our culture. To expand the study of that and focus it with the McGovern Institute is really quite an exciting day. And again," he said, turning to the McGoverns, "I thank you for making it possible."

President Vest introduced three faculty members who "represent for us today the fact that we have such a broad expanse of synergistic activities that are already under way" in neuroscience. The first was Professor Susumu Tonegawa, director of the Center for Learning and Memory, who won the Nobel Prize in 1987 "for his dramatically important work in the field of immunology."

Professor Tomaso Poggio is co-director of the Center for Biological and Computational Learning, which involves "research collaboration in artificial intelligence, computer science, engineering and the neurosciences," Dr. Vest noted.

Mr. McGovern commented, "We hope that others with newfound affluence in the technology industry will quickly exceed [the $350 million figure], and we'll be very happy just to make a contribution to motivate that accelerated commitment."

Mr. McGovern outlined the funding arrangement. "It's in the form of a cash gift. It starts at $5 million a year," he said, adding later that that figure was based on an estimated budget of $20 million for the McGovern Institute with staff and faculty totaling 300. He said in such an institute, about 75 percent of the budget should come from research grants and that the balance was made up by the donor.

He explained that the $5 million would increase each year by the Higher Education Price Index, which rises somewhat faster than inflation because of the high cost of state-of-the-art equipment and highly talented faculty and personnel at universities. "So you assume that 5 percent a year, and that would mean that over 20 years we give out $165 million. And then, in the 20th year, an endowment will be made that's equal to 20 times the last gift. So if you did the 5 percent inflationary projection, we'd have $12.5 million as the 20th year gift, so the endowment then would be $250 million," he said.

The McGovern Institute for Brain Research will be led intellectually by 16 McGovern Investigators, including 10 new faculty at MIT. All the investigators will hold faculty appointments in academic departments at MIT such as brain and cognitive science, biology, electrical engineering and computer science, linguistics and bioengineering. The new institute will also offer unique interdisciplinary learning opportunities for both undergraduate and graduate students, in keeping with MIT's commitment to integrating research and teaching at all levels.

A WEALTH OF RESOURCES

MIT already possesses a wealth of resources in the fields related to brain research.

Commenting on the growth of interest in neuroscience and on the possibilities for future research at the McGovern Institute, Mrs. McGovern said, "To be able to play a role in the drama of discovery in the field of neuroscience and to give researchers and students a venue in which to decipher the intricate machinery of the human brain is incredibly stimulating and exciting to me. I am thankful that the dream Pat and I share can be actualized."

Mr. McGovern noted, "We hope the research at the McGovern Institute will be able to expand the understanding of the processes controlling human perception, memory, emotions and communication."

Headquartered in Boston and posting annual revenues of $2.56 billion, IDG is the leading global provider of information technology media, research, conferences and expositions. The company publishes more than 290 computer newspapers and magazines and 4,000 book titles in 80 countries, and it also offers online users the largest network of technology-specific web sites around the world through IDG.net. IDG also produces 168 computer-related expositions in 35 countries, and its research arm, International Data Corp. (IDC), provides computer industry research and analysis through 49 offices in 42 countries.

A version of this article appeared in MIT Tech Talk on March 1, 2000.