Historians question the ways that history and memory interact 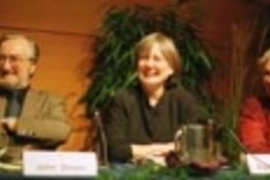 ↓ Download Image
Caption: Left to right: MIT professors John Dower and Pauline Maier, and Dame Gillian Beer, a professor at the University of Cambridge, discussed "How do history and memory shape each other?" at one of the School of Humanities, Arts, and Social Sciences colloquia last week.
Credits: Photo / Donna Coveney

Caption:
Left to right: MIT professors John Dower and Pauline Maier, and Dame Gillian Beer, a professor at the University of Cambridge, discussed "How do history and memory shape each other?" at one of the School of Humanities, Arts, and Social Sciences colloquia last week.
Credits:
Photo / Donna Coveney

Rosalind H. Williams, the Robert M. Metcalfe Professor of Writing in the Program on Science, Technology and Society and the Program in Writing and Humanistic Studies, opened the third colloquium in the School of Humanities, Arts, and Social Sciences anniversary series, "How do history and memory shape each other?"

"With the awareness of our own mortality comes awareness that there is a larger collective story," said Professor Williams."The panelists here today are going to reflect on the complex relationships between myth and history, between memory and forgetting."

To illustrate how memory shapes American history, Professor Maier discussed the process of writing, editing and signing the Declaration of Independence. Thomas Jefferson, she noted, is widely credited as being the author of the Declaration. It's even engraved on his tombstone. But historical documents show that his account of the drafting of the Declaration -- an account written decades after the event -- was altered by wishfulness, ambition and ordinary mistakes.

"Historians have used Jefferson's account of the drafting as if it was perfectly unproblematical. Many different people had contributed to its (the Declaration's) creation, not just one great man," said Professor Maier.

As to why Jefferson himself didn't set the historical record straight, Professor Maier said, "His governorship of Virginia ended in disaster. He did nothing as Secretary of State or as vice president. His presidency ended in disaster. By the 1820s, Jefferson feared for his place in history." Thus, memory and longing conspired in making an American myth out of history.

Dame Beer used the example of the life and work of Charles Darwin to explore beliefs about memory. Noting that Darwin's theory of evolution was, implicitly, a portrait of a world that existed before human memory or witness, Dame Beer said, "Superiority of memory thus does not depend on its length -- many animals, such as horses, have very long and good memories -- but in the multiplicity and comparison of ideas."

Victorian society, naturally, would resist the idea that the "human is part of the rampage of ordinary fruitful life forms." But while he used the Victorian language of "progress and improvement, onward and upward, for Darwin, memory itself was functionally powerless," she said.

"The World War I inscription, 'Only victory remains and a fame forever secure,' is poignant to look at now, for of course, victory didn't remain. And the inscription on the World War II memorial reads only, 'In memory of those who gave their lives.' No 'brave men,'" he said.

The issues of World War II, including its nuclear legacy, shape ideology, memory and politics today, said Professor Dower, whose research focus is the post-war occupation of Japan by the United States.

Noting that increasingly accurate information about the behavior of the Japanese in China, of Stasi in East Germany and of the French in relation to the Holocaust is now available to historians, Professor Dower asked, "Why were things buried? Why? For political reasons. So Hiroshima becomes a way almost of erasing everything that went before Hiroshima. The Vietnam Memorial is a very moving experience. But it's also a figurative wall. Because there were millions of other dead people (besides Americans)."