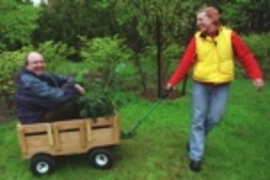 ↓ Download Image
Caption: Lee Knight, a senior in mechanical engineering from Port Washington, NY, who graduates on Friday, June 2, pulls Professor David Wallace and a plant in the Green Wagon. The device transports items and then converts to a bench on which elderly users can work in the garden.
Credits: Photo / Donna Coveney 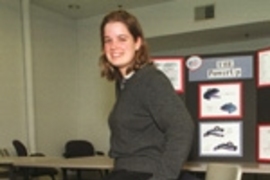 ↓ Download Image
Caption: Mechanical engineering senior Aimee Angel of Portland, OR, who gradutes on Friday, June 2, demonstrates Power-Up, designed to assist people who have difficulty getting up from chairs.
Credits: Photo / Donna Coveney

Caption:
Lee Knight, a senior in mechanical engineering from Port Washington, NY, who graduates on Friday, June 2, pulls Professor David Wallace and a plant in the Green Wagon. The device transports items and then converts to a bench on which elderly users can work in the garden.
Credits:
Photo / Donna Coveney

Caption:
Mechanical engineering senior Aimee Angel of Portland, OR, who gradutes on Friday, June 2, demonstrates Power-Up, designed to assist people who have difficulty getting up from chairs.
Credits:
Photo / Donna Coveney

CAMBRIDGE, Mass. -- Plenty of people are bitten by the gardening bug this time of year, but how many of them would purchase a Garden Bug machine to help with the work? That's a question a team of MIT student inventors sought to answer when they took their battery-powered device to the National Museum of American History earlier this spring for a special exhibit.

"A lot of people said they'd be willing to buy it for $200 to $250," said Roger Chang, a senior in mechanical engineering from Fairfax, VA who graduates on Friday. He thinks the Garden Bug could be built and sold for $150.

He and his teammates on the project from their class 2.009 (The Product Engineering Process) describe the machine as "a cart-like device that can be used to comfortably lower an elderly person to a kneeling position and then raise [him or her] back to the standing position. It was designed to be lightweight, easily stored, but sufficiently robust to insure user confidence." The prototype works for a person up to 200 pounds and 6 feet 4 inches tall.

But selling or even marketing isn't the point of 2.009. Coming up with an invention that has marketing potential, and designing and building the alpha prototype, are the goals of the senior-level course, the third in a triad of design and manufacturing courses required for mechanical engineering majors.

This year's 2.009 theme was to design electromechanical devices for the active elderly population, said Professor David Wallace, lead instructor for the course. Students were divided into six 19-person teams. Each team had to prepare three ideas to present to a "governing board," consisting of Professor Wallace and the other course instructors -- Professors David Cochran, Woodie Flowers, David Gossard and Igor Paul, and instructors Hamid Hashemi and David Meeker -- who then chose a more focused product theme for each group to pursue.

"After the three-idea presentation, our morale was pretty low," said Mr. Chang, whose team's three ideas were all thrown out. They had spent nearly two months brainstorming and doing marketing research on a garden wheelchair, a climate-controlled wheelchair and a snowmobile for the elderly. "In retrospect, I guess the ideas weren't very good."

In a two-hour emergency session the next day, the team generated the idea that became the Garden Bug. The idea passed the board's scrutiny and the team was off and running to design and build the device in the remaining few weeks of the course.

Students consider the course difficult and time-intensive, and claim that working in large teams can be demanding. "We went through a lot in this class," said Mr. Chang. "Some people never want to see product design again, but I love it. It's what I want to do."

"While the team experience was very trying at times, I think it worked well, ultimately," said Aimee Angel, whose team created the Power-Up portable sitting and standing aid. "It was difficult to have 19 people with different skills and levels of dedication working on one project. But the experience was useful in a real-world context, and I think we all learned a lot through the process."

In addition to the Garden Bug and the Power-Up, the other 2.009 inventions are Get Up and Go, the Pool Lift, the Garbage Porter and Green Wagon. Like the Bug, they're designed to help people with outdoor activities. The Green Wagon, a battery-powered wagon activated by a slight tug on its handle, can haul gardening tools and supplies. Its side rails also fold down into seats. The Garbage Porter, a battery-powered lift with powered wheels, can lift and transport heavy loads, making it useful for taking garbage cans to the curb or hauling firewood from shed to porch.