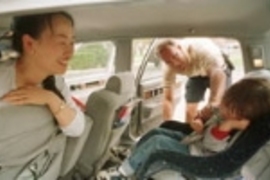 On May 5, Campus Police conducted a Child Passenger Safety Checkpoint to teach parents and caregivers how to properly install a child safety or booster seat in their motor vehicles.

The event began at 10am, and cars were "waiting in line 15 minutes beforehand," said Sgt. Cheryl DeJong Vossmer. By the end of the day, the team of technicians had reinstalled 68 safety seats and replaced 12, officers said.

"I can go home tonight feeling really good, knowing that we have made life safer for 68 children. This was a great day for cooperation among a lot of people. And it's great to have the support of Anne Glavin, chief of MIT Police, to do a project like this," said Sgt. Vossmer.

The program was sponsored by the MIT Federal Credit Union in conjunction with the MIT and Cambridge Police Departments. The first of its kind in the Boston area, it was free and open to the public on a first-come, first-served basis.

Support from Burger King in the Student Center, the Coca-Cola Bottling Co. of New England and Toys R Us in Cambridge helped defray the cost of replacement safety seats for 12 families. Other support came from police departments in 16 area cities and towns as well as Bristol Community College police, Massachusetts State Police, the Cambridge Department of Public Health, the Governor's Highway Safety Bureau, and members of Zeta Beta Tau and Delta Tau Delta fraternities.

"If you were unable to attend to have your child's safety seat inspected, please contact your local police or fire department to inquire if they have a certified technician to inspect your seat," said Sgt. Vossmer.

Massachusetts law requires all children to ride in a federally approved child safety seat until they are at least five years old and weigh more than 40 pounds. Children who are over 40 pounds but under five must ride in booster seats, which are recommended for children five or older who weigh 40-80 pounds. Bigger and older children must wear a properly adjusted safety belt. Police may stop a car containing children who are riding unrestrained and fine the driver $25 for each unrestrained child.